Prior to the start of the new school year, I blogged about some classroom management strategies I had found around the ELT blogosphere and my plans to draw on them once classes were underway. One of the strategies I wanted to implement was that of a ‘class contract’ negotiated between myself and the students. After much hard bargaining over the first couple of days of term, I made individual agreements with all of my classes, the details of which I will give in this post. 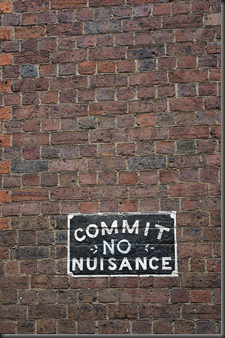 Just about sums up what I expect from my students :) - Image by JoeGray

I decided everything would be up for negotiation and told the kids as much. I started with a proposal that I could make 4 simple rules for them and they could then make 4 rules for me. Every class agreed it sounded like a fair deal and off we went. Each of my rules had to be ratified by the whole group and (luckily!) they were all accepted in each of my 6 classes. They were:

As far as I’m concerned, those rules cover most bases: The first and last ones are in response to issues last year when we on occasion lost over 5 minutes of class time due to students not being prepared for the lesson to begin or packing up when there were a couple of minutes still to go; the rule about listening covers interrupting and idle chit-chat at the back of the class; and hopefully the rule about reacting to mistakes will help create an environment where the kids feel secure enough to express themselves.

And then the fun began! I put them into groups (of 3 as per Mr Wilson’s post ;)) and ask them to come up with some rules for me. All of these rules were put on the board and discussed before they chose four of them to keep. During the discussions, negotiations and modifications could be made. I must admit to a bit of manipulation here as I pointed out that, for example, a rule saying no homework at all would mean I couldn’t allow them full access to the website I’m currently setting up as that would include homework tasks (clever, eh?)

It also served as a good language learning exercise as they were able to see the difference a single word could make in the meaning or emphasis of a sentence. For instance, they learned that “The teacher can only give us homework once a week” carried more weight than “the teacher can give us homework once a week”. They were also exposed to some useful if-clauses such as “we can play word games at the end of the lesson if we finish everything early” and “we can eat in class if we are careful not to make a mess”.

There were some more bizarre rules of course. In one class, by unanimous decision, I have to reward the best 3 students of the week with chocolate (I will keep a list of who I have rewarded to make sure everyone gets a treat at some point). And, apparently, in one class if the class average is above 95% on an English test, I have to sing to them (now I really dislike exams! I should be safe though - that particular class averaged around 85% on their tests last year)!

I’ve already seen early signs that it has had an effect on some classes. Several kids thanked me afterwards for letting them have some input and were happy to see that I returned the next day with the rules printed up on a poster for display in class. I also made sure that those classes who requested games (and chocolate!) got them at some point last week so they could see I intended to keep my part of the bargain. However, one class (the ‘pink elephant class’ - who else?) seemed to view the choosing of rules as just another in-class activity. They seemed surprised when I stuck up the poster with both my rules and their rules on it the next day and, to be honest, they haven’t done a good job so far of sticking to them - still work to be done there.

On the whole, it was a good way to start the year as the kids immediately got a say in the way the class will be run. It was all summed up for me perfectly by one boy in particular who, as we were negotiating the rules and discussing the importance of having a few rules in class, said:

That was added to the bottom of all the class posters!