Like crossing the alps with (pink) elephants - My ‘difficult’ class

June 12, 2011
Those of you who’ve been following my blog for a while may recall a post I did shortly after the beginning of the school year, entitled ‘Outdone by the Pink Elephant’. In that post, I was trying to solve the puzzle of why a class I was having trouble with behaviour wise seemed better when a new teacher who had been observing us (the ‘Pink Elephant’) did a practice lesson with them. Recently, Kirsten Hawkins (@lingliziya on Twitter) came across that post and asked if I would review how the rest of the year with them went and whether or not I had had any success in finding a way to work with them.

Well, as my time with this class is effectively over, here goes… 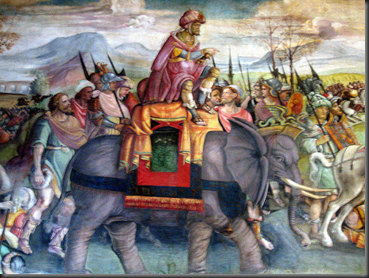 Sticking with the elephant theme, at times me dealing with this class felt like Hannibal crossing the Alps complete with a drawn-out war off attrition and a stalemate neither side were happy with (but without the pitched battles and bloody massacres of course)! There were difficulties throughout the year, from dealing with one particular ‘challenging’ boy/class clown, to vicious fights in class to trying to get them settled down on Friday afternoons and, unfortunately, no permanent solution presented itself.

At times, we were kind of trapped in a circle: they would act up, I would try to keep them on track, they would ignore me, I would take names with the threat of passing them on to the class teacher, they would be sorry… only to start acting up all over again the following week!

I tried various things which either failed or had limited success. Putting them into groups was a bad idea as many of the kids had a mean competitive streak which would regularly boil over into heated rivalry or they would deliberately sabotage their group’s work if they didn’t get along with the others. Games also brought about similar results with far too much gloating over success or crying in the event of losing out.

Something that did work for a while in the second semester was the fact that there was a video to go with our reader, an adaptation of the Wallace & Gromit animation The Wrong Trousers. Promising them we would watch part of the video on Friday afternoon, dependent on good behaviour during the week, worked well. However, this was not ideal as in my other classes I was using the video in all sorts of different ways, often prior to reading,  to maximise the learning potential. However, with this group, I was forced to always leave the video until after reading as a carrot on a stick to keep them focused, as a tool of control rather than learning. Similarly, there were other productive student-centred tasks and unplugged moments I was able to utilise in my other classes that I had to abandon or skip all together with this group because they got out of control too easily.

One of the problems, as I mentioned in my last post, is that they didn’t take my ‘conversation’ lessons seriously. With no official exam and (initially) no grade attached to my classes, they took the opportunity to relax and break free from the usual teacher-fronted lesson format a bit too far. Even later when it was decided I would give a grade based on their classwork, little changed. I spoke to one boy after a lesson about why he wasn’t writing anything in his notebook and reminded him that not completing any tasks set would result in a low grade. “What will your parents think about that?” I asked. “Nothing,” he replied. “I got 90% in my last English test so they are happy.” During another ‘little chat’ with a different boy, I was surprised when he said I was his favourite teacher. “Really?” I said. “So why do you act like this in my class?”. he thought for a second before replying “Ali is my best friend but I like punching him! You are my favourite teacher but I like annoying you!” - quite an attitude from a 10 year-old!

Of course, it wasn’t all bad. There were some lovely kids in that class who always worked hard, participated and treated me the same as they would any other teacher. I felt really sorry for them as they complained to me regularly that it was always the same group of kids who acted up in English, music, art, and other classes resulting in the whole class being labelled as ‘difficult’. I worked hard to let them know that I did not think that way and they appreciated that.

One big surprise was their level of performance when we did The Wizard of Oz in the theatre. The rehearsals were difficult, at times approaching complete chaos in the classroom, and yet they pulled it all together for the final show. Many other teachers commented that the two groups from this class were the best they had seen in the entire year group. They really enjoyed getting into roles and acting, so much so that I continued doing drama-based activities with them even after the show had finished, which were some of the best lessons we had together.

So, it was a difficult and challenging year and I can’t help but feel I never really ‘cracked it’ in terms of motivating them or enthusing them. What could I have done differently? Discipline wise, not much as we are told to keep problems contained within the classroom meaning there is very little support. Classroom management wise, I think I should have devoted more time to explaining what my lessons were about and establishing some ground rules. We had so much material to cover with the readers, our Fun For Movers book and Wizard of Oz preparations that I didn’t want to lose too much time early in the year. I now see that it would have been time well spent.

I also think routines would have helped - in trying to respond to the problems I faced early in the year, I chopped and changed things too often. With a set way to start and end the lesson and move between activities, I may have had more success in keeping them on task.

Their love for drama was connected to a desire to get up and move about. I think the opportunity to be a bit silly and show off to the rest of the class within the context of the lesson was something they enjoyed. I just wish I had discovered this earlier in the year and been able to exploit it more.

That was the most difficult class I’ve had in ten years of teaching. Although I could have done a few things differently, I also have to remind myself that there was only so much I could do. After all, I only saw them for 4 hours a week for one year of their school lives whereas they have been in a class together in since 1st grade. Several teachers have struggled with the same kids before me and I’m sure their teachers next year will too. Without an established system of support for teachers dealing with difficult classes, there is only so much we can do…. but that’s another post for another time.

Oh, and one more thing I could have done differently - I should have worn a suit more often of course!