The Five Stages of Dogme

June 06, 2011
Having been an active tweeter and blogger for a round a year now, I’ve noticed that discussions around the phenomenon that is Dogme ELT (also known as Teaching Unplugged) seem to come round in frequent cycles. The pattern is the same: some event such as a conference or a particularly fiery blog post comes around and the whole ‘what is dogme?’ debate kicks off, usually including several more blog posts, an ELTchat session, a PLN challenge and finally a video by Scott Thornbury to sort all the mess out.

With each cycle, people new to the concept of dogme get caught in the debate and try to add their own personal perspective, consider how it might apply to their own context or just try to figure out what on earth everyone is getting so hot and bothered about. I have noticed similar patterns that seem to emerge and stages that each newbie to the teaching unplugged concept seems to go through and that prompted me to do some research and develop ‘The Five Stages of Dogme’ framework.

Please note that this research is entirely based on casual observation, hearsay and general assumption. Furthermore, the findings are reported in a tongue-in-cheek manner and bear no consequence or relevance to the real world of ELT or dogme itself. To avoid confusion, I would like to state that ‘The Five Stages of Dogme’ (also known as the Dodgson-Dross Model) are completely distinct from and in no way influenced by ‘The Five Stages of Grief’ (or Kübler-Ross Model), which is a completely different made-up framework of no particular use. 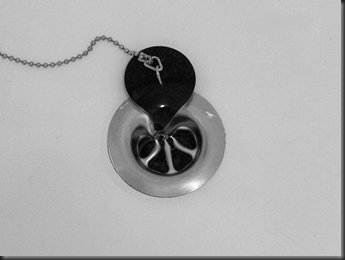 It’s unplugged - but doesn’t that mean it’s all going down the drain?
Image by tonyhall
1. Denial
This is the first stage encountered by the teacher who is hearing about dogme for the first time. The most sceptical of all will dismiss the idea of a conversation driven, materials light mode of teaching focused on emergent language as ludicrous, comfortable as they are in their carefully constructed fool-proof grammar-based syllabus world. The more open minded may experience some shock at this point having never before considered the possibility of moving away from the coursebook and their denial may be expressed in the form of “but it’s just not possible” or “aren’t we supposed to work with the coursebook?”

For teachers at this stage, careful guidance is required to ensure that they become open to the idea and don’t just dismiss it out of hand. Even then, most teachers will need some time to figure out exactly what dogme is and it is those stages we will look at next.

2. Anger/Confusion
Once they have gotten over the initial shock of discovering the concept of dogme, our newbie teachers follow one of two paths. The sceptics will exhort anti-dogme rhetoric in quite harsh terms labelling it as ‘irresponsible’, ‘cruel’ or ‘evil’ especially for new teachers who are yet to brainwashed in the coursebook ways and dismissing the unplugged practitioners themselves as charlatans who are merely ‘winging it’ and going into class unprepared and unplanned. They also label the dogmeists as ‘anti-coursebook’, ‘anti-technology’ (even if the sceptics are anti-technology themselves) and so on.

But not everyone is so sceptical. Once realising that maybe there is something to be said for this dogme stuff after all, rather than anger they experience some confusion and may be heard to say things like “so, dogme is just teaching without a coursebook”, “it’s just a conversation class then” or “that’s what I’ve been doing all along!” even when they clearly haven’t. These teachers need some time to explore the idea and dig beyond the surface.

3. Negotiating/Questioning
There then follows a period of ‘negotiation’ in which the teacher venturing into the unplugged world starts to ask questions about dogme in different contexts. “Could it work with beginners/young learners?” is usually a pretty common place to start often followed by “How could it work with exam classes?” or “What about business English?”

The sceptic, however, will not ask these questions with any desire to find the answers but more in the manner of “hah! Gotcha now - didn’t think of that one, did you?” When confronted by the eager answers of the dogmeists showing how teaching unplugged can meet a wide range of needs, they may revert to Stage 1 or Stage 2 in an attempt to regroup and think of some more specific or unique circumstances in which dogme is sure to not work. Once they have thought of asking whether or not dogme could possibly work with groups of 60+ kindergarten students forced to study for the TOEFL Junior exam (what would work in that situation?), they will come back.

The genuinely open-minded, on the other hand, will not just ask the question but seek the answers as well. They will analyse their context and look for ways an unplugged approach could work and whether or not it would improve the learning opportunities of their students. This makes them ready to move onto the next stage.

4. Depression/Experimentation
By this point, our sceptic may be thoroughly depressed as they realise those darned dogme doers just have an answer for everything. A period of self-doubt may follow in which they truly question the validity of the grammar-syllabus, the exam-based system and using celebrities to make texts more ‘fun’.

Our ever eager open-minded teacher is more likely to start dabbling with some actual dogme practice at this point, though it may take some time before they fully pull the plug. They may announce something along the lines of “I’m going to do a dogme lesson today!” as if declaring it aloud makes it so (in truth, they are most likely still doing a pre-prepared task and topic, just without the coursebook or hand-outs). There is the danger here that a muted response from their class may lead to some feelings of depression before the teacher bounces back for another attempt. Good feedback though leads to further experimentation and blogosphere discussion, which finally brings us to Stage 5….

5. Acceptance
After much soul searching, our sceptic may finally accept the inevitable and allow him/herself to be baptised in the waters of dogme with little resistance. There is always the possibility, of course, that the sceptic never reaches this stage and instead reverts to denial that such a thing could ever work. Our open-minded teacher will hopefully have indulged him/herself fully by this point and be ready to march on (with no excessive baggage weighing him/her down) and never look back!

It should be emphasised here that these 5 stages are very much rigid and will be passed through in this manner and order with no exceptions (except for those already noted). So, are you a dogme sceptic or ready to pull the plug on your coursebook dominated days? What stage of the model are you at? Please share your  thoughts and comments below…