Taking the Pics out of Coursebooks

The poor old coursebook. For such a long time it was the centre of my teaching world, but nowadays it has lost its prominence. Whereas it was once the glue that held my lessons together, it is now neglected and only used occasionally and begrudgingly.

But it does have to be used once in a while. Much like a couple trapped in a relationship that has long since lost its spark, we still have to make the odd appearance together. They say it’s for the sake of the kids even though they would probably be better off in the long run if we made a clean break and I carried on alone.

In such cases, cynicism and ridicule often come to the fore. However, this does not necessarily have to be detrimental to learning. I have found poking a little fun at the material we have to use, especially the pictures, can actually bring out a high level of creativity in my students.

Let me give you an example with the following picture: 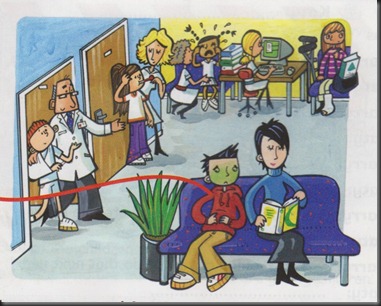 Nothing too special here you might think - a standard picture of people in a hospital with various ailments. We could elicit vocab, speculate about the illnesses and injuries, listen to the accompanying recording and match names to the people.

OR we could speculate that the boy with the green face might be an alien and that plant next to him is actually a rather outlandish hat. We could also say that his mother is not particularly caring as she quietly reads her book and ignores her distressed half-alien son.

What about the girl in the tennis outfit who is crying? Did she fall and bump her knee? Or did she go into a fit of rage having lost the match during which she broke her mixed-doubles partner’s arm and is now in tears fearing the consequences?

What about the slightly dizzy girl who needs a nurse to help her put a lollipop in her mouth the right way round? Or the other nurse who is chatting on Skype instead of doing her job?

With some gentle encouragement from me, I have found that my students can really get their imaginations going and come out with some very interesting language. They are then keen to go on to the listening activity to see just how far off the mark their guesses were (in this case, we were not far wrong with one as it turned out the alien/boy with stomach ache had in fact been made ill by the cooking of his neglectful mother!)

And then they start taking the pics all by themselves as happened when this image came up: 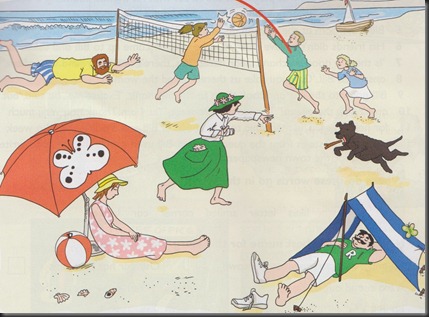 Without any prompting from me, I had kids deciding the man with the beard sprawled on the sand was not in fact playing volleyball but was instead a castaway who had just collapsed on the shore after a marathon swim from his desert island. The small girl just behind the boy playing volleyball was not his team mate but rather she was helping the other girl by sneaking up to push him. The other interpretation they had was that the woman with the bandaged hand had been bitten by the dog the day before and was therefore throwing a stick at the mutt in an act of revenge! All stuff the students came up with using language and vocabulary far exceeding the targets of the book itself.

Some may say we’re not taking it seriously but I just say we’re taking the pics….

and getting creative at the same time.

In one of my classes tomorrow, we are likely to come onto this picture: 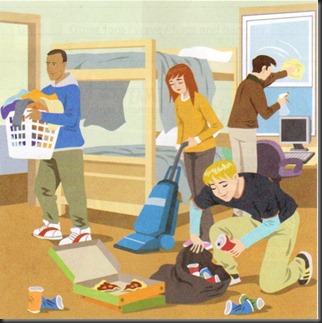 What do you think? How can we have fun with this one? What weird and wonderful interpretations might they come up with this time?