Lessons on the Fly - Snow Stories

One great thing about my recent lessons based on snow is that the snow has kept on falling. To see just how much, please compare the photo from the first post in this series with this one taken yesterday: 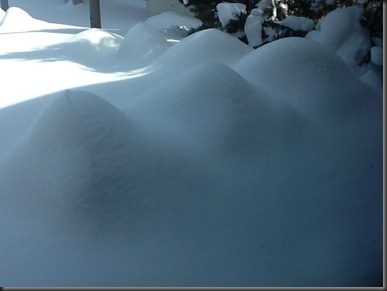 Where have the benches gone?

That has made it easy to keep the theme running over a period of three weeks without the students losing their interest. Having done various picture-based activities modelled on the Flyers test in the previous lessons, I decided to tackle something a little more difficult this time. The Reading and Writing paper contains four text-based parts. Each one requires some form of gap-filling, either placing words into the text itself or completing summary sentences. One of these parts features a picture with an accompanying story. Five words are missing from the text and the students complete it by choosing from a list of words at the end of the story before picking out the best title from three options.

As we had started to explore information about the characters in my students’ drawings in the previous lesson, we extended that this time by writing short stories about them. The students had the option to work individually or with a partner (I always like to give such choices to them) while I monitored, making suggestions here and there and helping out when needed. They were really into the activity, partly due to the continuing wintery weather outside and partly due to the level of personal involvement and engagement they felt. Quite often, I have to help a lot of students get started when we do a story writing activity but in this case all I needed to do was write the prompt One snowy day on the board.  Efforts included this one from a boy who is usually reluctant to write: 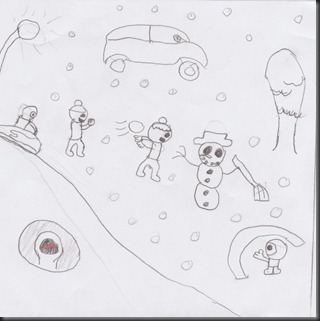 One snowy day, four friends (Mark; Fredrick, Kurt and Tim) went to the park because there was snow everywhere. While they were in the park, Mark and Fredrick had a snowball fight and Kurt was sledging. Later, they made a snowman together. They had a lot of fun. Then, they went home and drank hot chocolate.

Once the stories were finished and checked (self-editing with a little input from me), I instructed them to write three titles, one of which should be correct and two of which should be misleading. The students/groups then took turns to read the stories before asking their classmates “What’s the best name for the story?” and presenting the three options. Usually, when we read out things we have written in class, half of the students switch off and don’t really listen. With this activity, they were all eager to answer the question at the end - a classic case of creating a purpose for listening I guess!

I then asked the authors to choose four or five words from their story, write them in a box at the foot of the page and then erase them from the original text. Stories were then exchanged with classmates and the tried to put the words back in the right place. Of course, it helped a little that they had heard the stories earlier in the lesson but it was a good way to get them to analyse each other’s texts more closely.

I collected the stories in at the end of the lesson with the aim of creating more web-based homework. Using Hot Potatoes, I typed up some of the texts and created a gap-fill text together with the original artwork. This was then uploaded to the class page on the school wiki to give them some further practice at home.

Again, I could have given them photocopied sample questions and gone through them in detail but I feel this way, the students were much more engaged and got a much more thorough insight into this particular section of the exam (Reading and Writing Part 4) than they would have otherwise. Plus, they got to do some story writing, error correction and listening on the way as well as providing the raw materials for a personalised homework task! What more do we need? 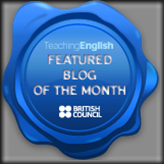 These lessons have been going well so far and I have enjoyed doing them and writing them up here on the blog. I was therefore delighted to be contacted by the seemingly omnipresent Ann Foreman at the end of last week, who informed me the first post in this Lessons on the Fly series Let It Snow had been chosen as the Teaching English Featured Blog of the Month for February. Thank you Ann, Rob and the rest of the Teaching English team for this award - it’s a real honour and fantastic way to get confirmation that I’m on the right path!