A couple of weeks ago, I had my classes working on projects as a follow-up activity to a reader we had just finished called Miami Police File: The O’Nell Case. It was an enjoyable read about a group of high school students investigating the mysterious disappearance of one of their teachers. What made this story particularly interesting (for a graded reader aimed at young learners at least) was the macabre twist that the teacher was not only found dead at the end but he also had been embalmed in wax and placed on display in the town Wax Museum (sorry if I’ve ruined the ending for you)! 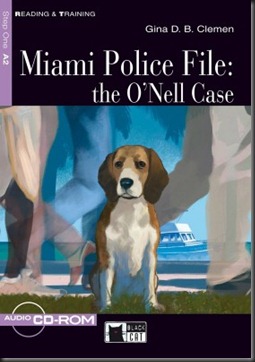 As my students had really enjoyed the story, I wanted them to do something fun and engaging once the story was finished (i.e. NOT a comprehension quiz, a vocabulary word search or an additional non-fiction reading text only loosely connected to the story itself). A big theme for me in my teaching right now is getting the students involved in activities that are productive rather than receptive so I decided on some project work.

As for how to do the project, that was up to the students as well. Some preferred to work in large groups of 5 or more while others preferred smaller groups or working alone. Some wanted to write stories, others wanted to record them and others wanted to make videos. Some produced huge posters and others produced smaller ones. Some asked if I could help them with the production stages while some asked if they could put it all together at home. Whatever they decided to do, I was happy to go along with and offer help when needed/asked for.

Personally, I’m a big fan of collaborative projects. When working together, I find that the students produce results that are greater than the sum of their parts. They get really creative and imaginative and that is great to see. Just as important is allowing them full control and ownership of the project. My role was very much one of facilitator - I just gave them the opportunity and helped with things they couldn’t do like editing (both language and videos).

However, I noted that I was the only one who seemed to be doing this. Other classes had read the same book but they had just done a comprehension quiz and then moved on. When enquiring why this was the case, the following answers were common:

The first one is understandable - with an overloaded syllabus, units to cover and exams to prepare for, time is precious. However, I believe that making time for projects will ultimately benefit the students more than merely moving onto the next topic, unit or worksheet. In fact, I would rather see elements of our syllabus removed to make space for more project work but that’s another post for another day.

The second point comes down to classroom management. Of course, keeping track of different groups doing different things is not easy but that does not mean it is impossible. I think the teacher’s self-perception is important here too. If you want to be in control and direct every detail, then you are making you job harder than it needs to be. If you let go, hand control and responsibility over to the kids, you may well find yourself surprised at what they can do.

As for the third reason, we need to reconsider our aims here. I do not expect my students to produce fantastic pieces of prose or error-free work. They may not possess the language to produce the desired project when taking the first steps but part of the aim of doing has to be acquiring the skills and language during the task. That’s where I see one of my key roles - helping out with language when and where needed, seeing what the students want to say and them helping them say it. Also, if the students get to set the agenda,  they are more likely to aim for a reachable goal (with a little assistance on the way).

Finally, the classic question of “where’s the language learning?” Here, we need to look at the whole picture instead of the immediate aspect. Yes, they may use L1 while brainstorming and discussing ideas but ultimately, they will start to put something together and focus on the target language. With a little suggestion here and there, they can produce something very much worthwhile and with a little modern technology such as a camera, voice recorder or flipcam, their project can be turned into something far-reaching, long-lasting, and easily shared with family, friends in other classes and other students around the world.

My students were so thrilled to see their projects on the school website and the videos in particular were a big hit. One of the best things of all was the fact that certain students who are usually shy or reluctant to do work in class ended up writing their own scripts and then getting together at the weekends or after school to make their own films in English! That’s the kind of thing that makes it worthwhile and the goal we should keep in mind rather than worrying about time or language use in class.

(If you’d like to see some of their cinematic productions, you can check out the video playlist.