Lessons on the Fly - Back to the Drawing Board

Apart from a few slowly melting piles, the snow in this part of the world has finally gone… 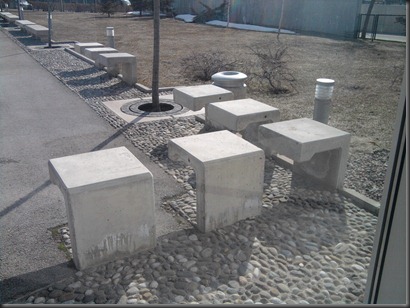 Grass! Sunshine! Quite a contrast to weeks gone past.

…and the time for using our snow pictures has melted away too. We had a good run of activities with them but I think we had gone as far as we could so the time had come for a new injection of creativity.

One good sign was that the students were keen to draw again (rather than the groans of ‘not again, teacher!’ that I had feared) so we decided to go with a different activity. I asked the students to turn their notebooks to the side (landscape format) and divide the page into two. They then drew a line across the bottom of the page but (as I also told my students at the time) I’ll tell you what that was for later.

On one half of the page, I instructed the students to draw a face. The details (male/female, young/old, hairstyle, eyes, facial features etc.) were all up to them and the only other instruction was to make sure their class mates did not see it. As usual, I monitored while they were drawing, asking questions, making suggestions and helping them out with vocabulary like freckles, spots and moles were needed.

Once the drawings were done, the first task was to pair up and do a ‘pictogloss’ activity. They described the face they had drawn (again, there was no specific instruction on what language to use - I just waited to see what they would come out with) and their partner listened, ask questions for clarification and then started to draw. After they had exchanged roles, they compared their pictures to see how similar they were (good practice for the listen, colour and draw section of the listening test with some speaking and describing pictures thrown in as well).

What about the space at the bottom of the page? Well, here we created a profile for the person in the picture. Name was the obvious place to start but after that, I encouraged the class to decide what other information should be on the profile. Predictable topics such as hobbies, nationality, date of birth etc. came up but each class had something different as well. In one class, they included future ambitions, in another it was last holiday destination and one class for some reason came up with ‘celebrity crush’!

Having made their notes, they then returned to their partners and asked questions to complete the profile for the face they had drawn in the pictogloss phase earlier. Following the activity, we went over some of the question forms they had struggled with and I then asked the students to circulate and ask about the faces drawn by other students in the class as reinforcement.

And that was the lesson. Again, we could have done a sample listening activity and we could have done a practice information exchange activity for the speaking section of the tests. However, we instead did something creative with lots of student input and a mix of different communicative and language focus skills. Much more engaging and productive.