Lessons on the Fly: Let it Snow

We’ve had a lot of snow in this part of the world recently- not enough to cause major disruption but enough to ensure that the last six weeks have had a constant backdrop of snow. Despite snowfall being an almost daily occurrence in that time (and snow holidays being non-existent), the students still manage to get incredibly excited by it all, much to the annoyance of many teachers whose well-planned lessons have been ground to a halt by cries of “IT’S SNOWING!!” followed by a rush to the window. The usual reaction of most teachers is to pull the curtains shut and get back to work. However, I like to approach things a little differently and so it was last week that we made a lesson out of snow. 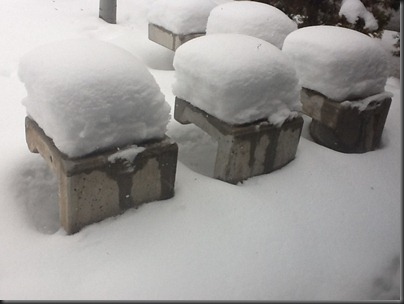 Taken at my school last week - find this photo and many more much better ones on eltpics.

I teach five different 5th grade classes at my school in partnership with another teacher and twice a week, we split the class and I take half of them to my own classroom. The room has windows running all down one side and, with the curtains open, there is a great panoramic view of the surrounding countryside (we are on a campus outside the city limits). With the snow coming down thick and fast one morning, I pulled all the curtains open before the lesson began to let the wintery scene fill the room. When the students came in, they were all taken aback by the view and, after a couple of minutes of settling down time, I decided to make use of it.

Together, we brainstormed all the things we could see outside, which led to a number of collocations and compounds of ‘snow’ coming up (snowfall, snowstorm, snowflake, heavy snow, fresh snow, deep snow and so on). I then asked what they would do if they were outside right now (asked in second conditional form without any comprehension problems and even a few ‘I would…’ answers - who would have thought it?) That brought up a bunch of extra vocabulary, some of which most of the knew already (e.g. make a snowman, make snow angels), some of which they didn’t (e.g. sledging) and some of which they needed guidance with (e.g. have a snowball fight, dress up a 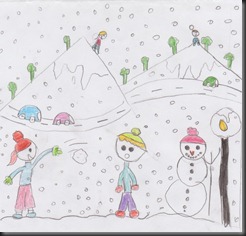 With all this vocabulary on the board and ideas buzzing around, I asked them to draw a picture showing all of the things we had talked about. As they drew, I went round asking questions, supporting them with the new language and offering ideas. I also got stuck in myself - my little stickman sketched always seem to put some of the less confident artists at ease!

So far, so good but at this point some people/dogme doubters/observers may start to say “over half the lesson time gone and all they’ve done is draw and come up with a few ite 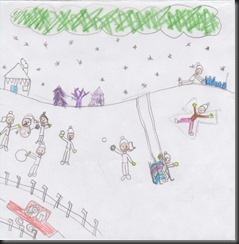 ms of snow themed vocabulary - where’s the language production? Where’s the learning?” Fear not, for I shall now explain where we went from there.

As I said in my previous post, I am currently charged with preparing these students to take the Cambridge Flyers exam later this year. As anyone familiar with these tests will know, there are a number of questions that are picture-based and so, with our snow-themed efforts, we got cracking with the following exam-style activities:

One Flyers question presents students with a black and white illustration and asks kids to listen to a recorded conversation and colour the picture accordingly. They may also be asked to draw something extra or write something on the picture too. I had told the students not to colour their pictures as they drew, partly with keeping the drawing stage short in mind but partly with doing this activity in mind too. I asked them to swap pictures with a partner and explained that the other person would colour it as directed by the original artist. 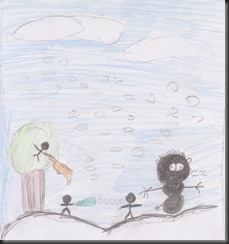 So, one student took another’s picture and listened as they were told to colour the snowman’s hat red, write MUFC on the back of the boy’s coat and so on. This not only offered exam practice but also gave great speaking practice. There was plenty of use of prepositions, descriptive adjectives, have/has got and there is/are going on, all without the students being prompted to do so. It was also interesting to see how much language they had picked up from listening to the examples on the CD in their regular class as I heard lots of things like ‘Can you see the girl over there by the tree?’ and ‘No, not that one - I mean the one who isn’t wearing a hat’. All of that language had probably been receptive before but now they had a reason to activate it.

Listen and match the names 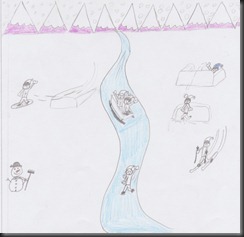 Another exam listening activity involving pictures asks the students to match names to the people illustrated based on the conversation they hear. That was our next activity. With their own pictures back in front of them, I asked the students to write a list of names. They now worked with a different partner who asked “Who is John?”. They then described the characters they had drawn. The partner had to identify who was being described and point to them (I thought drawing lines wasn’t a good idea in case anyone complained about their picture being ‘defaced’ or ‘ruined’). Again, they not only practiced the listening part but got some focused speaking practice in as well as they described people in the picture, their actions and what they were near.

And that’s not all… 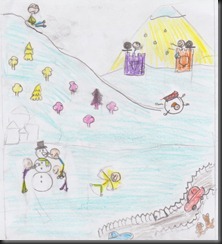 Sadly, our lesson time for that day finished there. Again, some detractors may still question the value of half a lesson of drawing and two activities when we could have practiced several question types in a more ‘standard’ manner. Well, again I would emphasise that high level of language that was used and used creatively during these activities. On top of that, it was based on the students’ own artistic efforts giving them a heightened feeling of personal involvement and connection to the activities. Finally, why should it stop here at just one lesson? There are many other activities we can do with these pictures to practice for the Flyers test and with that in mind, I collected all the pictures at the end of the lesson so we can make use of them the next time we have an exam prep lesson. I’ll leave those of you who are familiar with the Cambridge YLE tests to guess what those activities might be.

…plus a little bit of digital homework!

One of the speaking questions in the test involves two pictures with the students asked to describe differences between them. As my kids had drawn pictures based on the same wintery theme, that made them perfect for the same activity. To add a little twist, I scanned the two images below (drawn by two girls who always work together hence the similar style) and posted them on the class page on our 5th Grade website with the task to describe the differences between them. Once again, the task was a big hit (described to me as ‘much more fun than normal homework’!) and the girls were very happy to see their own contributions forming the basis of an activity for the whole class. The promise of more artwork to be used on the website in future has caused considerable excitement as well! 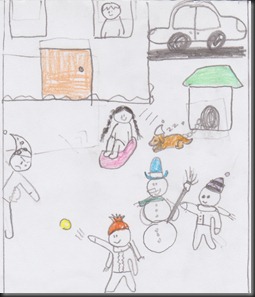 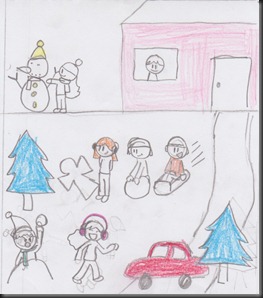 Can you describe the differences?