Lessons on the Fly: More Snow

February 23, 2012
Last week, I started off a series of lessons designed to get my students ready for the Cambridge Flyers test without resorting to photocopied worksheets and sample exam papers. We began with a picture based on the heavy snowfall that was cascading down outside and then did two activities: listen and colour (Flyers Listening Test Part 5); and listen and match the names (Flyers Listening Test Part 1).

This week, I returned the pictures to the students (having taken them in to make a few scans for the English website but more on that in another post). It has been an aim of mine in recent times to get more mileage out of activities and student-generated resources in classroom and so, both in terms of keeping the focus on the students’ work and balancing the half a lesson spent last week to produce the pictures, we came up with some more lesson ideas based on them. 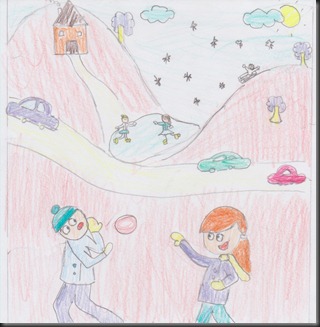 More fun in the snow

I say ‘we came up with’ the ideas because that’s exactly what happened. I asked the students what kind of activities they thought the pictures could be used for. After a few minutes of brainstorming, this is what they had thought of:

True/false statements based on the pictures

In the Reading and Writing section of the test (Part 2 to be precise), students are presented with a picture and 6 or 7 sentences which they then read and answer yes or no depending on whether the sentence is accurate or not. Their idea was to write their own sentences about the pictures and then quiz their friends. As they were writing, I went round and helped with the specific language needed (and it was good to note that most of them had retained vocabulary from the previous week such as sledging and have a snowball fight). They then got into groups, showed their pictures to each other and read out their statements.

With a pre-prepared practice activity, this would have been all over in 2 or 3 minutes but, done this way, the activity was a lot more in-depth. The students got creative with their language and again got to see the task ‘from the other side’ as they were writing questions, not just answering them. As we did the activity orally, there was a lot of speaking going on as well, which is always a bonus.

Guess the word
Another Reading and Writing question (Part 1 this time) involves reading definitions of words and choosing the correct one from a list of vocabulary. This has long been part of our lessons in game form with teams defining words for each other to guess. The students wanted to do something similar here so we decided to describe items of vocabulary that appeared in the pictures for the other students to guess. Quite a range of vocabulary came up as there were not only the snow and winter related words but also the ‘extra additions’ that had been included in some pictures like UFOs, yetis and giant pacmen intent on destroying all in their path!!

Again, this helped turn a one minute paper exercise into an extended activity with the students engaged and speaking to each other in English. As they were coming up with their own definitions to quiz their friends with, they got quite creative as they tried to catch each other out (such as one boy who described a snowman as ‘a man that is not really a man’!)

Information exchange
One of the Speaking parts of Flyers involves a classic information exchange. The examiner and candidate each have a card with question prompts and short answers and they ask and answer each other’s questions based on the information given. Having anticipated that the previous two activities would be suggested, I was quite impressed that my class came up with this idea that I had not though of - they swapped pictures with a partner, studied them and came up with a few questions that they would like to ask. The questions they wrote focused on asking for more information about the people in the pictures, what they were doing and why they were doing it (good practice of general information questions as well as present continuous). Not only was it good question writing practice but, when they started to talk to each other, they really had to think on their feet to come up with answers as they invented details and added background information to their pictures. I think all would agree that quick thinking and improvisation are two good skills to have honed for a speaking test!

And that was where this week’s session ended. The question and answer session about the pictures at the end got me thinking that there is a story behind each picture waiting to be uncovered… I think that’s where next week’s lesson will come from!
Cambridge YLE Tests creativity dogme Flyers lesson ideas Movers speaking activities Starters teaching unplugged young_learners