A place for grammar in the YL classroom?

November 07, 2010
The first session of ELTchat last Wednesday (3rd November) focused on how to teach grammar with the discussion inevitably including how much grammar to teach and whether or not to do it explicitly (transcript available here). Following on from Richard Whiteside’s great follow-up post, I thought I’d elaborate on the young learner angle.

One huge difference I’ve noticed between YLs (again, I mean the kids I’ve worked with aged from 8 to 12) and adults is the amount of grammar and vocabulary they know. The adults I’ve taught were often obsessed with grammar and judged what they had learnt and how good a class/teacher was by it. By contrast, the kids are obviously not capable of handling complex “grammar rules” but they do know an amazing amount of vocabulary! I recall one lesson with adult learners where my students were stumped by the sentence “he was tied to the chair with a rope”. They got the structure but had no idea what was going on as none of them knew what ‘rope’ meant. When rope came up in a story book with kids, I was shocked to find they immediately translated the word and mimed either tying up actions or pulling out lengths of the stuff. In these examples, I believe the students who knew the vocabulary would have had a better chance of understanding the sentence than those who knew it was a passive structure. 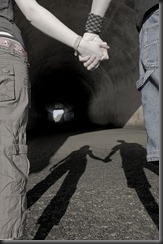 Grammar & vocab: inseparable
Image by Adam Foster | Codefor
All of which (kind of) brings me to my first point: grammar and vocabulary go hand-in-hand. It’s no use knowing one if you don’t know the other. If vocab is the clothing of our language, grammar makes sure it fits well. Anyway, enough with the analogies.

When kids (or any learners) pick up and learn vocabulary and chunks of language, they pick up parts of the grammatical system as well. They then go through a ‘messy’ process of hypothesis testing, reformulating and testing again. It’s the teacher’s role to encourage the process, providing opportunities for noticing and testing language as well as plentiful chances to recycle. So, they may pick up some adjective-noun collocations and later start to recognise that an adjective generally comes before a noun and describes it in some way before attempting to match other adjectives and nouns together and seeing what works.

So where does controlled, targeted practice fit into all this? Despite their young age, I still feel kids can benefit from some explicit grammar instruction. The key thing is to provide a meaningful context, otherwise it just goes over their heads. For example, a couple of years ago, my students were struggling with an activity in their book in which they were asked to describe items on picture cards using the target language of “I have/haven’t got…”. It was going nowhere so I started to give examples using the kids own items. I showed one boy’s pencil case to the class and said “Look! I’ve got a Spiderman pencil case.” Their faces immediately lit up and they started to show me and each other their merchandised items (that globalised kids’ culture again!). That meant they got their controlled practice together with a meaningful context. I dare say they picked up on some adjective/noun and compound nouns structures as well. At this point, I should also say that although I believe explicit grammar instruction to be of benefit, that does not mean I spend time at the board telling students about adjectives, participles and verb tenses. Such metalanguage is not necessary at this stage. When students make errors like ‘he go swimming every weekend’, I don’t remind them about ‘3rd person singular present simple’ but I may say something like ‘I go, he/she ….?’ and elicit the correct form from them, hopefully helping them notice something in the process.

Not your typical grammar book….
I’ll finish by referring to one of my favourite grammar books for kids. Of course, I don’t mean an actual grammar book (although they do exist for kids as I have seen a particularly dry one on my students’ desks which they use with their other English teacher). Instead, I mean ”Where’s Spot?” by Eric Hill! It may not strike you as a grammar book at first but take a look inside and you’ll see pages with a target language structure of ‘Is he (preposition) the (household object)?’ repeated throughout and placed in a meaningful context by simple illustrations with moveable flaps. What a shame that we don’t use it anymore! (another problem with the ‘all-in-one’ coursebooks that include their own stories with the previous unit’s target language crowbarred in). Spot wouldn’t be suitable for the age group I work with now but there are still other picture books with similarly repeated language that could be used. I’d love to use The Gruffalo for descriptions or The Incredible Book Eating Boy for habits and routines but there just aren’t enough hours in the syllabus!

So, in short, yes – there is a place for grammar in the young learner classroom. That does not mean there’s a place for 100% grammar lessons but, given a meaningful context and the chance to experiment with the structure(s), kids can benefit from some explicit instruction to complement all the stuff they somehow pick up!

For any one working with kids, I recommend looking at either (or both!) of the following books, which have great chapters summing up grammar and vocabulary much better than I ever could:

You should also read the G for Grammar entry from Carol Read's ABC of Teaching Children blog, which contains a lot of insightful comment.
curriculum ELTchat grammar vocabulary young_learners