Writing lesson – A Choice of Descriptions

October 22, 2010
In a recent post, I described one of the speaking lessons I’ve done recently with my ‘split classes’. Last week, it was time to engage the kids in some writing. I’ve generally found in my time working with YLs that motivating them to write above sentence level can be hard and writing is often the skill that is their weakest. One of the stated syllabus aims for this year is to improve writing through ‘focused activities to be done in split lesson hours’. However, I feel the ‘focused’ part is one of the things that causes a problem. Kids often find the writing activities too rigid and possibly on a topic that they have little knowledge of or interest in. So, I decided to introduce them to something I hope they will come to value: choice. 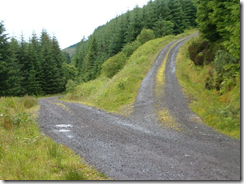 A hard path and an easy path? Or the high road and the low road?
By Patrick Mackie (From geograph.org.uk) [CC-BY-SA-2.0 (www.creativecommons.org/licenses/by-sa/2.0)], via Wikimedia Commons
In our regular lessons so far, we had covered animals as well as facial features and clothes. We had also done our pictogloss alien lesson last week. Rather than, as the syllabus suggested, have the students describe their favourite domestic animal, I decided to bring all the topics covered so far into play and told them to choose ONE out of: describe your favourite animal (pet or wild); OR describe your favourite person (family, friend or celebrity); OR describe an alien/monster (imaginary or one from a story).

Having done this before, I knew what was coming next: puzzlement! In every class, the students had to check with me. “Do we have to do all of them?”, “Just one? Which one?” and finally “You mean WE get to choose?!?” It both amazed and saddened me a little that they seemed baffled by the concept that they got to decide (albeit in a limited way) what they would write. Had they really only ever done set activities before? Nevertheless, once it clicked, the creative ideas started to flow. One boy decided to combine the animal and monster options by creating a strange hybrid of a pig, a wolf and a dragon; another made up an alien celebrity; and a girl described her ‘dream pet’ – a rattlesnake apparently! Of course, we had our fair share of horses, footballers, Hannah Montanas and regular aliens too.

The best part of it all for me was seeing how they responded to the freedom of choice. There was no complaining about not liking the topic, no claims that they didn’t know what to write and no shortage of creativity. Afterwards, I had them read each other’s work in small groups and ask each other questions, which they really got into, before engaging in some basic error correction (not too much though as the bulk of it would be saved for the next lesson and next split class post).

I firmly believe kids find choice in the classroom empowering, whether it be about what activity to do, working in pairs, groups or individually or anything else. It helps them feel valued and involved in the learning process. They feel that the teacher wants to listen rather than just tell them what to do. All of that can help promote creativity and independent, critical thinking – much better than just writing about ‘My Cat’ for the hundredth time!
choice descriptions lesson ideas writing young_learners