What happens when 4th graders take on the Wondrous Whiteboard challenge?

October 25, 2010
One blog post that caught my interest last week was by Jason Renshaw (aka English Raven) entitled the Wandrous Whiteboard Challenge. The concept is simple: at the start of the lesson, hand the board markers over to the students, see what they write and build the lesson from there!

Although no one was around to provoke me with a statement of “that’ll never work with young learners”, I imagined that was what some people might say and decided to do it. My first attempt went well but was unfortunately ruined by me not bringing my camera in and an over-eager student cleaning the board as soon as the lesson ended while I rummaged around for my mini-notebook.

Today, I was fully prepared with my camera at the ready and did it with two more classes (two of my split classes, so just 14 or 15 students in each), the results of which you can see below: 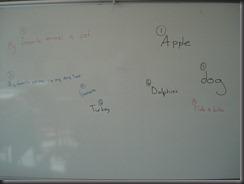 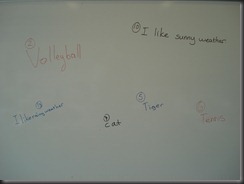 At the start of the lesson I said that before we started today’s class, I wanted them to write something on the board. There were a few confused looks exchanged before one girl stood up and asked for a pen (good start!). She hesitated for a second before writing ‘apple’. Her friends asked why she had written it and she shrugged and said “it’s just a word”. The next contribution was ‘volleyball’ before the next student decided to mix things up a bit with a sentence about her favourite animal. Here’s a list of what came up and in what order in case the photos are not clear:

Once they were done, it turned out the list of words was not so random after all as their ‘grammar’ teacher has just been going over favourites in the previous class and most of them were listing their favourite animals, sports and so on. I got them to tell me more about their favourite things and pushed them to come up with more details like ‘I saw a tiger at the zoo’ and ‘I ride my bike when I visit my gran’. An interesting point for them that came from ‘banana’ (favourite fruit) was that grapes are referred to as white and black even though they are green and purple! (They found that funny even though it’s the same in Turkish!)

This one was a bit different. This class is a bit noisy and it’s difficult to make them settle down. To make matters worse, at the start of the class one of my school’s ‘radio programmes’ began. This is basically what we would call an assembly in the UK with students from one class presenting something to the rest of the school. As the school I work at is quite large, this is done over the loudspeakers and during lesson time. Of course, they don’t listen and use the chance to chat and fool around. An ideal time to get them writing on the board then! This is what they came up with: 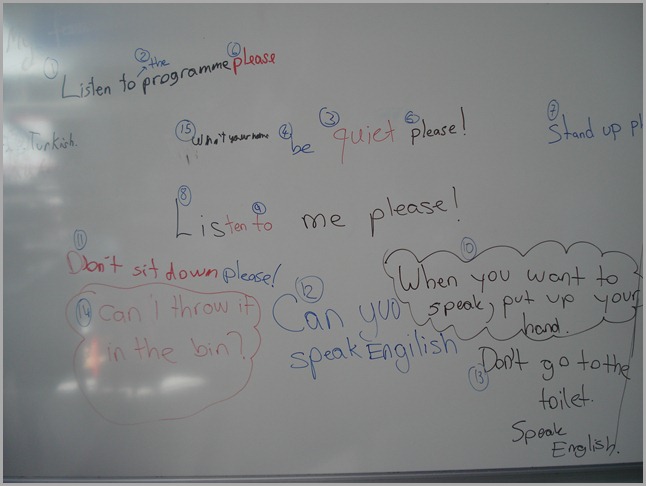 The first boy to take the plunge wrote ‘listen to programme’. Another student was up like a shot to insert ‘the’ into the correct place. The next student wrote ‘quiet’, the one after put ‘be’ in front and the next added a ‘please’ to the end. Obviously, a reflection of the fact that nobody was paying any attention to the voices coming out of the speaker.

In this class, I came across reluctant students who initially declined to take part. However, once their friends had written a few more phrases, they all wanted to have a go. As you can (hopefully) see, most of what they wrote centred around rules. ‘Stand up’, ‘listen to me please’, ‘when you want to speak, put up your hand’ and so on (there’s even a ‘don’t go to the toilet’ in there – something I’ve certainly never said to them!). Best of all mind, was the last one. It had no relevance to anything else on the board ('What's your name?' was the sentence) but it was written by the weakest boy in the class who never volunteers for anything and shies away from almost every activity. Today though, he got up and joined in - well done to the lad!

Once they were done and the radio programme was finished, I asked why they had written these things. ‘We don’t listen!’ came the immediate reply from one boy. ‘Our teachers always say these things to us’ said another. A conversation then evolved about what rules we have in class and why, the importance of listening to whoever is talking (as I always say, ‘if you just listen, I only need to speak for a few moments but if you don’t listen, it’s going to take much longer!’) and why we should say ‘please’. They told me how they didn’t like strict teachers with lots of rules or angry teachers. I pointed out that perhaps if they were a little quieter and more observant of basic rules, their teachers might not have to be so strict.

All in all, a good discussion especially considering it was all done in English with a class of 10 year-olds! One boy even came up to me after class and said ‘thank you for asking and listening to us’ – one of those moments that makes you think you’re doing the right job. Thanks for the idea Jason!

I haven't been the only one inspired by the Raven either. Check out these posts from around the globe of teachers trying out and/or discussing the same thing:
The Babbling Blackboard - Michelle Worgan
Teaching Unplugged With A Student ınteraction Whiteboard - Shelly Terrell
What Comes Out of Unsuspecting Students + Wondrous Board Challenge - Cecilia Coelho
Sport is... - David War
Guest Post #1 – Luciana Podschun’s Response to the Wandrous IWB Challenge - Luciana Podschun via Cecilia Coelho's blog
board work choice dogme teaching unplugged wandrous whiteboard young_learners