An addition to the ‘board’ meeting – Brainstorming adjectives

This post is another response to Jason Renshaw’s recent call for ‘A meeting of the board(s)’ in which we TEFLers display snapshots of our the whiteboards in our classrooms. Although I’ve already contributed to the Wandrous Whiteboard challenge, I’ve also decided to contribute the following as it’s a more ‘regular’ representation of how I use the board (I will, however, be doing more Wandrous Whiteboard style activities in the future).

We had arrived at a unit in our coursebook about adjectives and I decided to turn one of the book’s activities on its head. On the page, the students were asked to complete phrase like ‘a fast ______’ and ‘a tall _______’ but this struck me as being more useful for brainstorming nouns than adjectives so I flipped it round and gave the students nouns to brainstorm adjectives for. As we had done the weather last week, I started with ‘a ______ day’ (with a large circle in place of the blank space here) and invited students to the board to write their ideas like this: 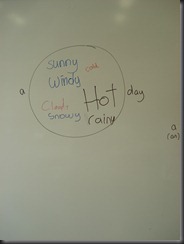 I’m a big believer in getting the students to write on the board because a) it involves them more in the lesson preventing board work becoming just me in front of the class, and b) kids always seem to love being handed the board markers! I then 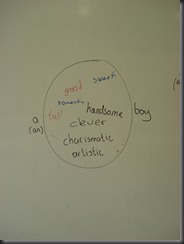 elicited some more nouns to describe. They came up with ‘boy’, ‘girl’, ‘hair’, ‘teacher’ (well, actually they didn’t – that’s part of my jokey response to them shouting out ‘TEACHER! TEACHER!’ when they want to say something) and ‘car’. I then put them into groups and gave them a minute for each noun to brainstorm words. When the minute was up, we set up a chain of kids coming up to the board to write an adjective in the circle and then passing the marker onto another kid. You can see the results (taken as separate photos for easy viewing) around the rest of this post.
We then reviewed their answers, clearing up spelling errors an 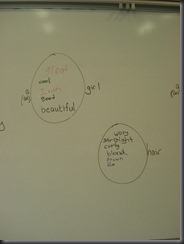 d incorrect answers. Some interesting vocabulary came up such as ‘romantic’, ‘charismatic’ and ‘artistic’, words which the boys came up to describe themselves. “But none of the boys in our class are like that!” was the comment from one girl. I added ‘handsome’ as they weren’t sure what the equivalent of ‘beautiful’ should be for describing a boy. I used my insertion of ‘teacher’ as a springboard for discussion on what, in their eyes, makes a ‘good’ teacher. ‘Funny’ and ‘happy’ were their answers! One other interesting point was that for ‘car’, most of the groups first came up with ‘clean’ when I was expecting words like ‘fast’ and ‘new’ to come up. Still, clean was one of the target words in the book so that was useful!
Alas, time was against us. They students updated their notebooks to include the extra words now on the board and our 40 minutes 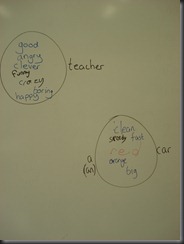 was up. If we had had more time, the next stage would have been to find opposites and see which words could be applied to the other categories. Still, we covered a lot in the lesson, not only brainstorming adjectives but also looking at related language such as “What’s he/she like?”, which was new question for them, and “What qualities should a good teacher have?” Also, despite it being a lesson mainly focused on the board, it had been student-centred for the most part. Plus, they got to come up to the front of the class and write on the board, which made their day.