Some thoughts on on-going professional development

October 31, 2010
Last week (27th Oct, 2010), the subject of what language schools should do for on-going professional development (PD) was discussed in the late session of ELTchat (check out the chat transcript and podcast if you missed it). Many interesting points came up which got me thinking over the weekend and led to this post.

One comment that was repeated throughout the conversation was that some teachers often seem reluctant to engage in organised PD, whether it be an after-school seminar, a weekend workshop or a conference. Many reasons were given: other commitments outside work, lack of relevancy, the fact that teachers are often expected to give up their time for free…. 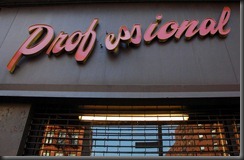 Not very…
Image by kenyee
I think time is an issue. Look at the examples I gave: after-school seminars, weekend workshops. These encroach on teachers’ free time and I think this is an issue that should be addressed. The first school I worked at held seminars and workshops in the early afternoon when no classes were scheduled and everyone happily attended. That’s a stark contrast to an experience I had a couple of years ago when asked to do a couple of after-school sessions on using PowerPoint in class.  Teachers I got along perfectly well with were giving me murderous looks: “I already know how to use PowerPoint. Why are you making us stay behind after school?” came one comment through gritted teeth. OK, so I’m exaggerating a bit but there was a definite air of reluctance around the whole thing.

My first suggestion would be to schedule in-house sessions for a time during the day when as many teachers as possible are free. Obviously, some would have to miss out due to clashes with lessons but different times could be used for different events to include as many staff as possible. I think it’s also important that departmental heads/DoS figures attend. In my experience, their presence and willingness to attend is appreciated and helps others take it more seriously.

Listening to teacher suggestions for topics is also an important factor. This helps to ensure sessions are as relevant as possible. Just look at our ELTchat sessions. Anyone can suggest a topic and we all vote on it. This kind of thing helps everyone get involved and interested. As another example, my school held its first ELT conference 2 years ago with an international ensemble of plenary speakers and experts giving seminars and workshops. Great as that was, many of colleagues commented afterwards that they didn’t find the conference as a whole entirely relevant to what we do (no sessions on teaching primary school aged learners for example). In the following weeks, my school did something very positive though – our feedback on the conference was actively sought and acted upon meaning the following year, while we still had guest speakers on the bill, many of the workshops were run by the teachers themselves. This meant the conference was much more relevant.

There is one other issue I’d like to see addressed regarding conferences though. My employer has schools located across Turkey and so each year the conference is held at a different venue. Last year, a group of us travelled from Ankara to Izmir for the event but, when we returned, nothing beyond ‘how was it?’ was asked of us. There were many ideas to share and discussions to be started but it never happened. While at the conference, my colleagues from Ankara came to my workshop (held concurrently with several others) to give ‘moral support’. That was, of course, much appreciated but I couldn’t help but feel it would have been of more benefit had they each attended different sessions to later report back on.

So, this all led me back to thinking about my professional development wiki idea (http://tedteachersnetwork.pbworks.com/), which is unbelievably still awaiting ‘official permission’. I believe this will offer a workable solution to many of the gripes mentioned above. No travelling into school on Saturday or staying behind late; no fixed time – watch/read/listen to what you want, when you want!; the chance for everyone to contribute whether by commenting, editing or starting a new page on a new topic; and a great way to introduce everyone to the wonderful PD resources available elsewhere online – all from the comfort of your own home.

In regards to the conferences and workshops, the wiki would be a perfect place to announce upcoming events and reflect on them afterwards. A goal for tomorrow then: get that official permission sorted!
conference educational_technology ELTchat powerpoint professional_development wikis