With an event the size of the annual IATEFL conference, it is important to go with an open mind. There is a temptation to go and see talks by ‘big names’ in ELT or play it safe with speakers you have seen before or have connections with online. However, that can mean missing out. There may well be a speaker you have never heard of before who will wow you with a great talk or it may be the topic that provides an unexpected surprise as some aspect of language education you had never investigated thoroughly before suddenly engages you.

And so it was for me at this conference with mobile learning. I consider myself to be a teacher who is confident with making use of technology in class but, more importantly, I am also a teacher who takes a critical view of the hardware, software, web tools, and apps that I could potentially make use of in class. I often think it is somewhat ironic that it was during and after studying for an MA in EdTech that I started to use tech less in class as I started to go beyond the ‘wow’ factor more. 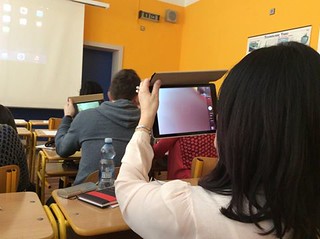 Image by @hanaticha via #eltpics

That is not to say that I never used mobile devices in class (indeed, I ran a workshop at the LTSIG PCE on using a gaming app to promote language learning) – my school has a set of iPads that can be checked out at anytime and I have also in the past ran activities on a BYOD (Bring Your Own Device) basis. However, this has been nothing more than an occasional project or single lesson task and I never really thought about sustained use of mobile devices both in and out of the school environment.

The first talk that had an impact on me was the opening session of the LTSIG PCE by Agnes Kukulska-Hulme, who talked us through a project to help ESOL students integrate to life in the UK. During her talk, she said:

That struck a chord – through mobile devices, students can engage with language learning when outside the classroom, outside the school even. They can receive notifications and information about where they are and the can also document it as well. Through use of their camera and microphone and any number of apps that integrate them students have the opportunity to create a record of the language and the world they encounter which can then be brought back to the classroom and shared. As someone who values personalised learning, this idea appealed to me a great deal.

But, of course, we can’t just start using smartphones and tablets in class and expect our students to be automatically engaged and producing fantastic examples of their language in use. As with any idea, there must be sound reasoning behind it and as well as forward planning for practical and effective use. This is why Nicky Hockly’s talk ‘Planning for Mobile’ was such an interesting one. 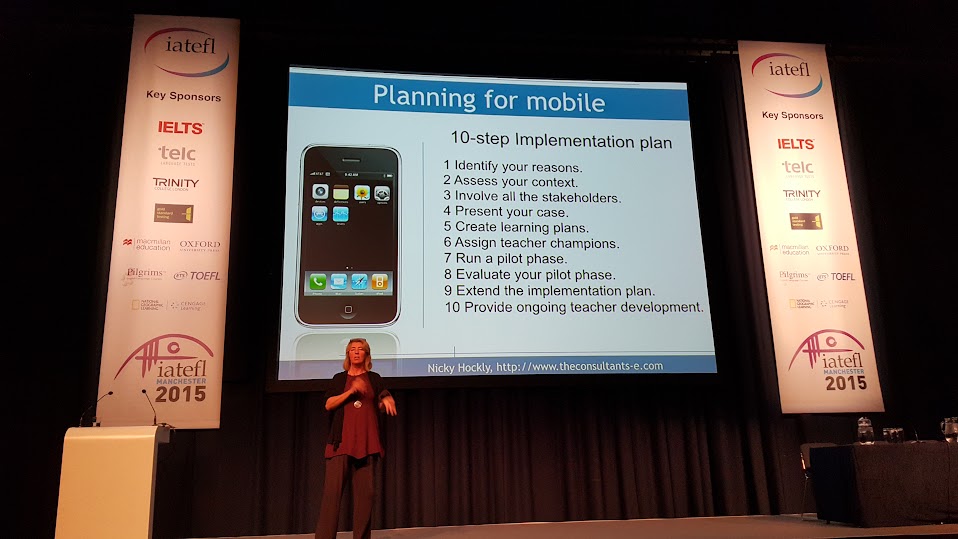 Nicky Hockly in action at IATEFL

She went through the whole process of why we might consider incorporating mobile learning into our language programme and the importance of involving all the concerned parties (colleagues, school admin, parents, and of course students) to ensure a consistent approach – Nicky highlighted this with an example of how she had previously taught a class with a whole programme of mobile learning projects planned only to see the teacher in the class next door going into lessons with a large box and demanding students surrender all their devices!

The importance of approaching stakeholders with a clear plan was highlighted as was the need for a pilot phase and (crucially) an evaluation of that pilot phase before more wide scale implementation. The need for learner and teacher support was also stressed, something that is perhaps lacking in my context at present.

Nicky also showed us some practical examples of how mobile devices can be used to do just what their name suggests – be mobile! They literally and figuratively put control of a task in the learners’ hands and should be used to get them out of the classroom, exploring their immediate environment and interacting with it. 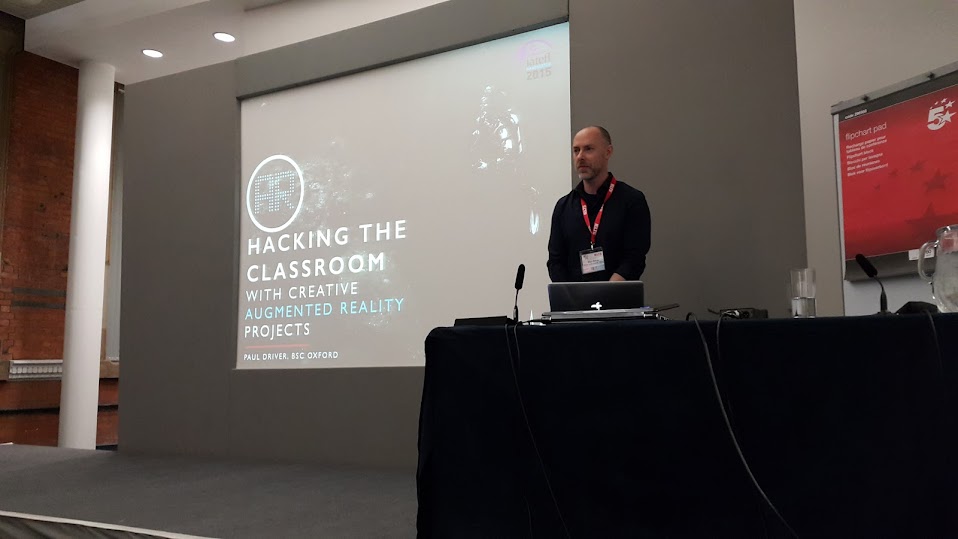 Speaking of interacting with our surroundings, one of the highlights of the conference for me was Paul Driver’s session ‘Hacking the Classroom’ about using augmented reality apps. I was lucky enough to get to meet Paul before his talk and see what AR actually is. He was at a stand in the exhibition hall surrounded by posters. They looked like normal posters until he opened an app called Aurasma and pointed his iPad at them. Suddenly, the images in the posters began to move and the people in the posters began to speak! Now, I have made comments in this very post about not falling for the ‘wow’ factor when it comes to technology but this really was a ‘wow’ moment!

Once I had undropped my jaw, Paul set about explaining how he puts this technology to use. His students had created ‘trigger’ posters with a high emphasis on images and not so much use of text but, through this app, they were able to embed video presentations in them. By holding up a mobile device (with the app running of course) and scanning the poster through the camera, the image would automatically play. The same technique had been used for information posters about his school and it was an interesting way to engage in audio-visual media rather than textual-visual as you might expect. 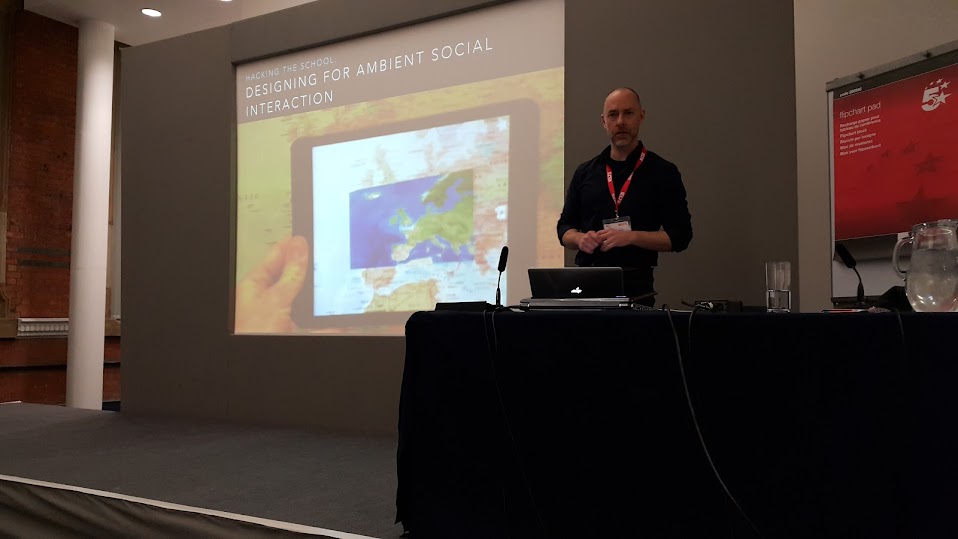 In his talk, he gave further examples of students using the app to create an interactive version of a world map to describe where they are from. He also described how he had created a ‘real world’ project for students in which the visited different locations outside the school and used the app to trigger video and audio of people describing what the area used to be like – an interactive listening activity indeed!

Not only do these devices allow interaction with the real world (rather than causing people to disconnect from it as is often assumed), they also afford a high degree of personalisation, especially in a BYOD setting. Dave Gatrell showed this in his talk ‘It’s MALL and it’s Wonderful’ with a mobile twist on the classic ‘Just a Minute’ game. Participants were challenged to find photos on their devices and then describe them for 60 seconds without pausing, repetition, or deviation from the topic. The use of personal photos definitely helped provide more engagement than a random topic and there is no need to ask your students to bring photos in as they already have them in their pockets!

Here are some other apps I saw in action at IATEFL and made a note of for future use:

Thinglink – an app demoed by Rolf Tynan at the LTSIG PCE. I have already discussed this one on my post about that day but in brief, it allows students to take photos and make them interactive by adding text, video clips, web links and more to them

Telligami – this was shown by Vicky Samuell (also at the LTSIG event!) and by Dave Gatrell in his talk. In the app, you can create an avatar and make a text-to-speech or audio recording to get it to talk. Vicky showed us examples of how her students had used it to introduce themselves and talk about their lives. As I have discovered with game avatars, this can provide a great way for shy students to open up more or even get into another character and produce extended spoken work. Dave also showed us how his students had used the app to present themselves as characters from stories and also how he used it for an avatar dictation in which he would describe his avatar while the students listened and tried to recreate it. Great ideas!

Aurasma – the aforementioned app used by Paul Driver for his AR projects.

Vine – as mentioned in my summary of the talks on video, a simple app for making six-second videos.

Of course, it is not the apps themselves that matter so much. However, these talks and these examples have given me some great ideas and provided me with the impetus to investigate more and examine some other apps with potential for use in the classroom and beyond.