April 11, 2015
After many years of watching from afar via the excellent IATEFL Online service, I finally have the chance to attend the IATEFL conference in person this year. Strange that it took moving to such a far-flung corner of the globe as Gabon for that to happen but the world of ELT moves in mysterious ways sometimes!

Finally at the University of Manchester

One extra motivation for attending this year is that the event is in Manchester. I spent three years as a student on the MA programme at the University of Manchester without ever getting the chance to come here so I was keen to visit. That was also the deciding factor in attending today’s LTSIG PCE as it was held one the University campus – a chance to meet my former tutors and attend a day of learning technologies could not be missed. (There was also the fact that I had been offered the chance to be involved in the afternoon showcase but more on that later.)

The first session was on mobile learning. Agnes Kukulska-Hulme from the Open University talked us through the process of developing an app for immigrants in the UK to help them with their language learning. It was a good example of how an app can be designed not only with the learners in mind but also in response to what the learners need and how they use their devices. My main takeaway is summed up in the following tweet:


Location based (situated) learning can be powerful & this is when mobile learning is at its best - Agnes Kukulska-Hulme #ltsigpce
— David Dodgson (@DaveDodgson) April 10, 2015

This is something I think could be applied to game-based learning as well. Agnes did touch on how a game was included in the app package as ‘a gateway to further learning’ for some users. I would love to see a game developed in the way this app has been – needs analysis, response to user feedback (perhaps through open alpha/beta testing), and something that tries to incorporate language naturally rather than forcing in some byte-sized grammar chunks.

Next up was Liliana Simon, who talked about the ‘Digital Corner’ project in Argentina and how teachers are being encouraged to make best use of educational technology in their contexts. It was interesting and encouraging to hear about such a state-sponsored programme  It was also interesting to hear that the same issues exist everywhere – teachers who are reluctant to use edtech, students who need training in how to use it effectively, those who have no or limited access to resources… It was also interesting to hear how some ‘issues’ have been bypassed. The course Liliana showed us for example encourages use of not only L1 but also other regional languages to exploit code-switching for its learning potential rather than trying to suppress it.

I still think the two questions I recently posed about using (or not using) edtech are the most important things to consider – a good teacher with tech also needs to be a good one without it and vice versa.It is important to break beyond the limits of your comfort zone:

"A comfort zone is a beautiful place but nothing ever grows there" says Liliana Simon #ltsigpce #IATEFL
— David Dodgson (@DaveDodgson) April 10, 2015


The morning was rounded of by James Thomas talking about error correction through online tools (something I have an interest in). He started by introducing an ideal world scenario:

NOT what James Thomas is going to tell us about error correction today #ltsigpce #IATEFL pic.twitter.com/hSg9Va8iHT
— David Dodgson (@DaveDodgson) April 10, 2015

He then went on to describe Hypal, an online system where students upload work, teachers annotate errors and give feedback, and a corpus then collects and analyses all the error data. I liked the way that technology was put to use to ‘semi-automate’ the correction process while maintaining the all important human factor of communication between learner and teacher, including teacher feedback, student responses, and making action plans.

The data generated by Hypal was also intriguing as it highlighted most common error types for individual students and the class as a whole. Such data could be very useful in informing a reactive teaching approach. The inclusion of specific errors in the corpus looks like a highly useful idea – a great way to see how often and where errors come up.

I will go into more detail about two of the afternoon showcases over on ELT Sandbox but one I will mention here is Rolf Tynan’s presentation of Thinglink, an app I had never heard of before. It seems to be a nice way to link different forms of media together with options to use images, add text, links, and video clips. This obviously has lots of potential uses. Rolf told us about students taking pictures of their fridges at home, describing the healthy and unhealthy contents, or taking photos of their journeys to school and annotating them, or teachers taking photos of the class and leaving feedback comments for students and parents. Many possibilities!

The final session of the day was given by one of my former MA tutors, Diane Slaouti. It was a pleasure to finally see her (and Gary) in action in person, though it was strange to be listening to her without headphones plugged in! 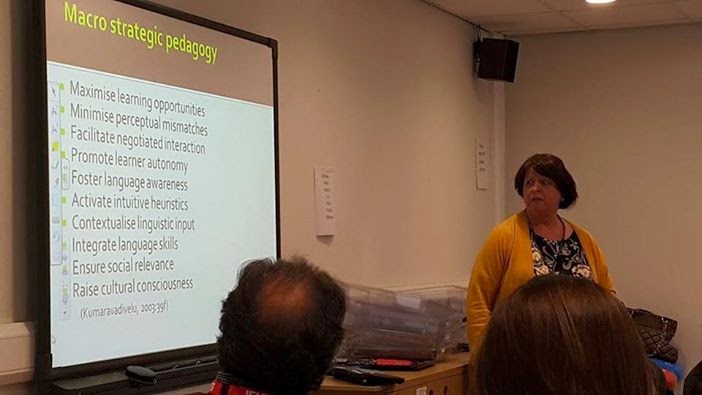 She had pulled off an impressive feat of adapting her talk throughout the day to react and respond to things that had come up in the other talks. She made the session interactive by asking us to reflect on the common themes we had identified and what we would take away from today’s session.

For me, two thoughts kept coming back: one was that (as mentioned above) many of the same issues exist in different locations and contexts; the other was that privacy is a concern. Nearly every app, web tool or other piece of software that was shown elicited a question about privacy settings and security…. Valid concerns but it does strike me as being over protective at times…

Anyway, it was a stimulating day and I am very much looking forward to the first day ‘proper’ of IATEFL tomorrow!
conference edtech educational_technology elt IATEFL IATEFL 2015 LTSIG LTSIG PCE