A Hand in Language Learning

There is nothing quite as thrilling as seeing a baby start to communicate: looking around when their name is called, waving, pointing, and the big one – clapping hands.

I have tried not to do over-analyse with my sons as they have grown up and developed their language skills but sometimes drawing comparisons between first and second language exposure and development is hard to resist! Our youngest is just a little past 18 months now and he’s not talking yet but he’s getting there. This post centres around some thoughts that started to fly around my head as he began to show understanding of the word hands. 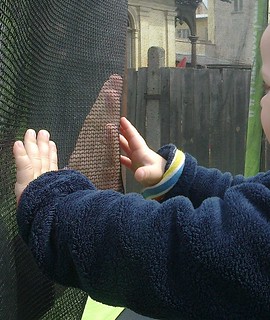 Not my kid’s hands… nor mine! Image by @HanaTicha via #eltpics

(I should point out here that these thoughts have been flying round for a few months and my son’s understanding has been growing through that time but the post fell into a kind of ‘development hell’ over the summer and then the new job settling in period. It is finally seeing the light of your computer screen thanks to a similar line of questioning posed by Kevin Stein on his excellent The Other Things Matter blog entitled “The Best (and yet still mostly useless) Lesson I’ve Taught This Year” . An honourable mention also to the final paragraph of a recent post by Hana Ticha on the equally excellent How I See it Now blog called “My Attempt to Square the Circle” (I say final paragraph as that really resonated but the whole post is worth your time of course!)

So, one day a few months back while we were still in Turkey slowly packing our things up and preparing for a new life in Gabon, I asked my older son to hand me some duct tape. When I said the word ‘hand’, my little one immediately held out his own hands – a very exciting early sign of understanding. Over the following weeks, I kept looking for similar responses from him. Over that time, I noticed the following things:

His understanding began with just the word hands. Any utterance involving that word caused him to show his hands. Slowly, he started to distinguish between the different words that preceded hands. First came the enthusiastic response to clap your hands and then wave your hands. Other hand-related commands soon started to follow (show me your hands, put it in my hand, hold my hand, and so on). In short, the basic word was acquired first and the rest of the language that accompanied it came later.

(*I’m sure there is a more academic term for this but I couldn’t recall it or be bothered to look it up in my MA notes. If anyone wants to enlighten me, please share!)

And lots of it! Once he had grasped the meaning of this word and all the other language that came with it, we made sure it was all recycled regularly. We must have used those terms hundreds of times over the space of a couple of weeks. The responses were not always consistent either. Sometimes, he would blissfully ignore me and continue with whatever else he was doing but gradually, he started to show his understanding and respond on a more frequent basis.

The classic nursery rhyme to go with all this of course is If You’re Happy and You Know it, Clap Your Hands. It soon became a favourite tune. At first, hands were clapped for every line whether instructed to or not but slowly, my little one started to pick up the other actions in the song too and extend his learning even further. As he picked up on a different body part and associated command, we rolled with it and went through the same cycle of reinforcement and repetition as with hands. This was all backed up by plenty of encouragement of course with lots of excited faces, noises, and applauding of efforts all round!

This all got me thinking about how my students learned and developed their English in class.

(Now, before going any further, a little aside to say that I am of course fully aware that what I have described above and what happens in a classroom are not the same thing. I have outlined the linguistic development of a baby in a first-language home environment and now I am going to talk about a large group of kids in a formal school setting having lessons, but bear with me. I will try to make a point eventually!)

One day, back in my old school in Turkey, I was

I looked through 5 different titles from 4 different publishers (again, I know it is by no means a comprehensive number but, hey, this is a blog, not an academic journal, and that’s why I am also writing up these reflections from memory several months later rather than from meticulously prepared notes). Predictably enough, hands was introduced through the topic of the body in all bar one of the books, which bizarrely had no reference to hands at all (even though gloves was one of the key words in the clothing unit!)

So far, so what? Well, I next looked at the context in which the word was introduced and practiced. In all cases, it was part of a unit introducing have/have got. There were examples of people’s faces and relevant descriptions. Fine, but of course describing body parts is a bit unnecessary as all the children featured in the book were in possession of the right number of everything! A couple of the books used animals to practice things like it has got 4 legs  and it has got a long mouth (or even a beak  but that was not ‘target’) and a couple more went for the monsters/aliens route with cartoony pictures and Xyrex has got 7 hands!! examples.

And that was about it. One of the books featured Put your hands up please for classroom language but I couldn’t find any other use of hands or any other body words in the rest of the book.

Of course, first and second language learning are not the same but repetition is said to be a key feature of both. Where was the repetition in these books? Context is also very important in language acquisition. What context does The monster has only one hand provide?

Clap your hands  was nowhere to be seen. Wave showed up in one book as wave goodbye but with no mention of hands. Shake hands, hand it in, give me a hand – these are all potentially useful language items in the classroom but they are not presented in the books.

So why not present these words and the actions that go with them? Why is it (almost) always body parts and has (got)? Why is it grammar practice over meaningful and practical use? I don’t have beginner or elementary classes at the moment but next time I do, I will take that approach – body vocabulary and collocations that go with the different words. I will of course report back on it when/if I try it here.

But for now, what do you think? Is a meaningful context not important at primary level? Should we simply focus on presenting grammar and let the appropriate use of vocabulary come later? I would be interested in hearing different perspectives on this!