Making an Impact in the Classroom… Literally!

One of the (many) curiosities of teaching kids is the fact that for a short period of time you are one of the people they see and interact with in their daily lives but, once the school year is over, they may hardly ever see you again, except for the odd moment here and there in the corridor (if that). We learn to live with that fact and content ourselves with the thought that we have in some way made an impact on the learning of those children and maybe even on their lives. After all, that’s what being a teacher is all about, isn’t it?

A couple of weeks ago, I was having lunch during one of my trips up to the middle school when a girl from the 8th grade approached me.

It took a second or two to place her face and recall her name (no mean feat considering that she was 8 years old when in my class and I have taught over 300 other kids since!) but it soon all came back to me. I remembered that she was a good but quiet student who always worked hard. She seemed surprised that I remembered so much (my memory always seems to store names, faces, places and times well - a useful trick for any teacher!) and then said “my friends and I always talk about your lesson…”

“Ah,” I thought to myself, ignoring the minor error of ‘lesson’ instead of ‘lessons’. “No doubt they remember those breakthrough moments, the projects we did, the songs, the games and all the fun of our positive learning journey together.”

“….the lesson when the projection screen fell on your head!” 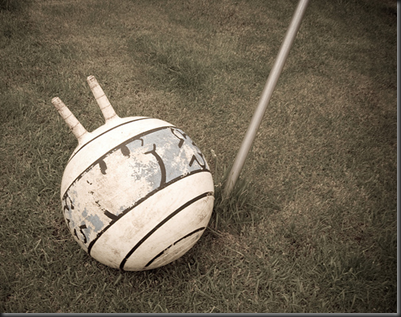 “Erm… what?!?” I said before another memory came back of one day when I pulled the projection screen down a bit too fast and the whole thing came of the wall whacking me over the top of the head in the process.

“When it happened, everybody went quiet but then you appeared from under the screen and said ‘ow!’ It was very funny!” Emergent teacher rather than emergent language then?

Anyway, we finished our chat and went back to our respective classes and I thought nothing more of it.

Until last Friday that is when I was in one of my classes in primary school. While the students were quietly reading a chapter of their book (yes, reading quietly - another off my ‘off the wall’ ideas that draws equal responses of derision and suspicion!), a pair of students called me over. “Do you know a boy called Berk?” they asked. That is the equivalent of asking somebody in an English speaking country if they know somebody called Steve so I asked for clarification.

“He says he was in your class… maybe 5 years ago,” they explained.

“Did he say which class?” I asked.

“He didn’t say the class,” came the reply “but he told us in one of your lessons the projector screen fell on your head! Is it true?”

Seriously? A year’s hard and productive work but all I remain known for is an accident involving a classroom fitting!!

Being philosophical, I suppose it is better to be remembered for something than not being remembered at all… even if it isn’t quite the impact I had hoped to make!

And at least I’m not alone - a quick look at Twitter last night revealed this little excerpt from a chat between Mike Harrison and one of my favourite new blog discoveries Phil Wade: 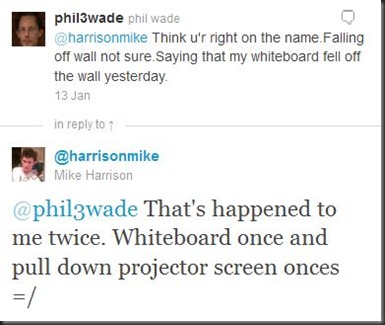 Well Mike and Phil, I can assure you that your students will remember you for a long time as a result!