Digital Storytelling with Voicethread (and How to Do It Offline)

January 08, 2012
As regular readers of this blog will know, I love doing things in class that are simple yet productive and full of student-generated content. It might be something like a drawing activity that leads into a whole series of other tasks, a couple of everyday items as the basis of discussion, or, as featured on my recent guest post on Teaching Village, a basic digital camcorder and some very creative young minds.

Another simple but effective web 2.0 tool I really like using is Voicethread. I love the interactivity it offers with different people able to leave messages on the same presentation slide as well as the option to combine images or text with audio or video comments. At the start of the school year, I was asked at work if I knew of any ways to make the activities we do for the school wiki more interactive and Voicethread was the first thing that came to mind. A crowd-sourced demo from my PLN and the suggestion that it could be used as practice for part of the Cambridge YLE Test speaking section was all it took to sell the idea. 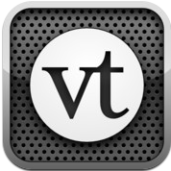 “Sure,” I replied. “Just get me some microphones, a webcam and user rights to upload from my class computer and we’re all set.”

“Isn’t there a way to do it without all that?” they asked….

Luckily for them, I’m a resourceful guy and I found a way to make Voicethreads offline.

For those of you who aren’t familiar with the Cambridge YLE tests, one part of the speaking section is a sequence of 4 or 5 pictures. The examiner starts the story off and the student has to finish it off, following the sequence of the pictures. The problem with preparing for this in class is that you have to do it in pairs or small groups, it’s impossible to monitor everyone and they just don’t listen to each other (ok, so that’s three problems!) They have a lot to learn from listening to each other but one of the hardest things about working with kids is getting them to see that.

So, my idea was to record each group narrating their own version of the same picture story and add them all to a Voicethread. First of all, recording them in class leaves the other groups with no choice but to listen and secondly, we then have a nice collaborative record of work to put onto the wiki for kids and parents alike to listen to at home:

How did I do it with a so slow it’s almost dial-up class internet connection and no microphone? Simple really - I used the AudioBoo app on my iPad to make recordings offline in class. Later, I uploaded them then downloaded them to my laptop via iTunes and it was then just a matter of going to the Voicethread website and putting it all together. As I have an educator account, I used different ‘identities’ to group each class’s stories together and that was that.

Now it’s on the school wiki, they have the chance to listen to each other’s stories. The next step, now that I have introduced it in class, is to put up a Voicethread with just the pictures and get them to record their own stories from home! (Hmm, just had a thought - maybe I haven’t done myself any favours here. Had I said “there’s no way I can do it”, would the school have finally agreed to upgrade the class computers and the internet connection? …..)

Anyway, once again the presence of recording equipment and the promise of being showcased online worked wonders for motivating my students to produce some very creative stories (like the boys who decided the person who jumped out of the snowman in the second story was not the kids’ dad playing a joke but was in fact a hunter who wanted to kill them!)

A Quick Plug for the Digital Storytelling for YLs EVO Session

If that has given you an idea or two for storytelling in the classroom, why not join me and a super group of EFL educators (namely Shelly Terrell, Barbara Sakamoto, Özge Karaoğlu, Esra Girgin, Jennifer Verschoor, Michelle Worgan, and Sabrina De Vita - I really did mean super group!!) for our EVO 2012 session entitled Digital Storytelling for Young Learners? We’ll be covering not only Voicethread but also many other simple but exciting and meaningful ways you can bring storytelling into your classroom via a variety of web 2.0 tools.

Registration is still open (but not for much longer!) - just join our Yahoo Group. You can also find out more information about our syllabus on our pbworks page and see some of the early introductions on our Posterous Space. Hope to see you there!
Digital Storytelling educational_technology EVO 2012 speaking activities stories voice_recording VoiceThread web2.0 young_learners