The end of the (Yellow Brick) Road…

It has become a tradition in recent years for each year group in my school to put on a show towards the end of the year for an audience of parents. A chance for the school to show off how they have progressed in English and a chance for the parents to coo over their little darlings in costume. The 4th Grade show is the Wizard of Oz and, with each of my 5 classes divided into 2 groups, I got to prepare and watch the final show 10 times over!

Anyway, after weeks of travelling the Yellow Brick Road (practice), we finally reached the Emerald City (the school theatre) but did we have a happy ending? Read on… 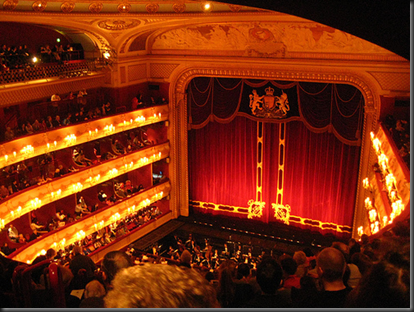 If you’ve ever put on a drama show at any level, you’ll have probably experienced the first thing I’m going to relate. Despite nailing it in practice, putting in great performances with all the right acting skills and volume, many kids got on stage and immediately reverted to reciting the script in monotone fashion with hardly any movement and no smiles! Some of them were just so quiet as well - stage fright I guess… This is one problem with the current format - they put in all the work for weeks on end but then only get one shot at the real thing on the stage.

However, for every kid who froze like a startled rabbit, another turned in a wonderful performance with everything falling into place at the last minute. It really is amazing how drama helps some weaker students open up despite their natural shyness or struggles with English. One boy in particular ((who has attention issues in class) put in a star turn as a munchkin, speaking in a squeaky voice, jumping and dancing around and doing all sorts of things nobody expected from him.

There were some of the other mishaps associated with the theatre like bits of scenery falling over, missing props or fluffed lines but on the whole, it was a success. The parents enjoyed it, which is the main thing, and most of the kids did too.

Was it all worth it?

Since the shows finished, I’ve pondered this question a lot. As I mentioned above, they only get one shot at it and it seems an awful lot of effort (10 hours of practice with me and another 10, possibly more with their other teacher) for a performance that barely last 30 minutes. Plus, some kids only have minor roles and so all that practice time gets them ready to say 3 or 4 lines on stage. I think next year we could cut the practice time considerably - most of my groups were ready to do the show about 3 or 4 weeks before they actually did and, in some cases, by the time the show came round, boredom had set in and keeping them motivated was an issue.

Nevertheless, there were some signs that the show had an effect on them and on their use of English. As the show was scripted, I thought there would be little benefit in terms of learning language but I’ve noticed some ‘chunks’ from the play making their way into their everyday speech and/or written work.

Take, for example, the following excerpt from the play when Dorothy first encounters the Wicked Witch of the West:

Witch: You killed my sister, the Wicked Witch of the East! Everyone thinks you are a good girl but your are not!

Dorothy: Oh, I’m so very sorry. I didn’t mean to kill her, really I didn’t.

This week, my classes were writing descriptions of characters in The Wrong Trousers and a few kids, writing about The Penguin, who wears a rubber glove on his head to look like a chicken, wrote:

“Everyone thinks he is a chicken but he is not!”

And then, I had a little chat with a girl who was being a bit overly-talkative in my class and I couldn’t help but laugh when she pleaded with me:

There have been several other examples of them ‘borrowing’ from the script when speaking English both consciously and without being aware of it, which is great!

So, all signs seem to point to repeating the journey with new companions next year. I’ll be pushing for a shorter period of practice to lower the risk of boredom, especially for the kids with fewer lines, and more opportunities for rehearsal in the theatre to reduce the stage fright issue.

Also, reflecting back on the whole experience and re-reading my earlier posts about the practice period, I realised it’s not just about the final show. If the preparation is done right, the kids can get a lot out of it. There’s all the work we did on showing emotions, displaying body language, using intonation and assuming character. And on top of all that, it was fun!

I have plenty of video clips of the different groups but I’m not allowed to show you those (school policy). Photos are apparently fine though so here’s a glimpse of what they all looked like in costume: 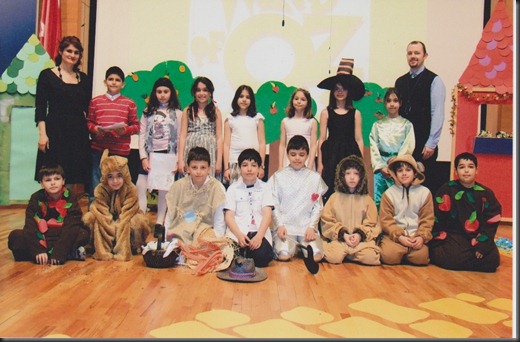 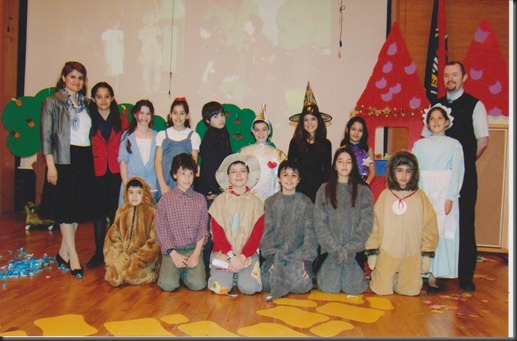