A second time in Second Life (with Haven Winton*)

I first heard about Second Life three years ago through a friend who had got hooked. He told me all about the virtual world, how it works, how you could move around, interact with other avatars, attend seminars, listen to virtual buskers and ‘live your other life’ and all (or almost all) for free. That was enough to tempt me to have a look but I ended up disappointed. Perhaps the experience was spoiled for me by the fact that I was playing World of Warcraft at the time. Compared to the fantasy world of Azeroth where I would travel with my Blood Elf Paladin and complete heroic quests, Second Life just seemed so … dull!

On top of the lack of a goal or game-playing aim, the graphics seemed poor, the whole thing ran so slowly and some of the other avatars around were just plain weird (of course, elves, dwarves and orcs in World of Warcraft are also weird but at least they are in context)! And so, I uninstalled the application after just a day and never entertained any thoughts of returning.

Until, that is, Second Life kept being mentioned by colleagues on my MA as a mode of online instruction. By chance, one of those colleagues was Nergiz Kern who had been heavily involved in teaching in Second Life for a while. Her experiences got me interested from an educational perspective and starting a course entitled Teaching and Learning Online provided the final push to start up again.

Our first session in Second Life was all about navigating the environment and manipulating objects. I think my experiences from games like Warcraft helped as I quickly got used to the basic controls and had a kind of intuitive feel for using the keyboard and mouse. In virtual environments, ı like to test the limits of what my character/avatar can do so I was soon sitting on top of walls and signposts. A brief tutorial in how to edit objects led to me creating this giant penguin (if you are a regular SL user and you see one coming, it’s most likely me)! 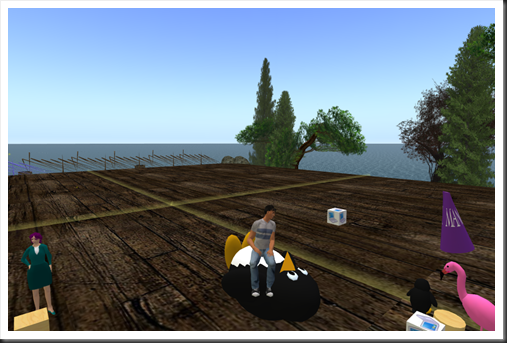 The second session in SL included a group task in which we were sent to various locations to retrieve information in the style of a scavenger hunt. My group visited a Science Centre and a Greek island, where we all ended up for a drink on the terrace and a post-task reflective chat. 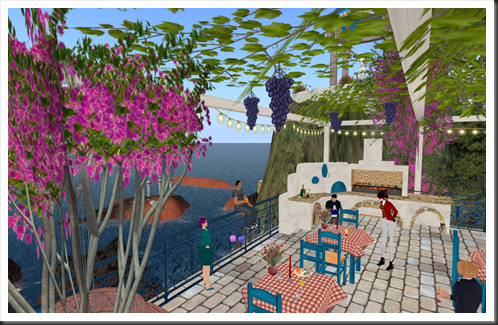 The ability to engage in voice chat was invaluable and really added to a sense of ‘being there’ and interacting together. This clearly has benefits for language instruction but I remain unconvinced for the following reasons:

Hmmm, plenty to ponder over a Tequila Sunrise! 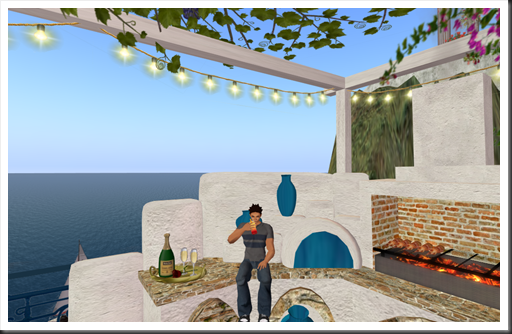 *Haven Winton is my avatar name in case you hadn’t figured it out.