The best (and worst) of teaching kids

Working with young learners is a bit of a rollercoaster ride - at times highly fulfilling and rewarding, at times infuriating; on top of the world one day, questioning yourself as a teacher the next; enough to make you want to do something illegal…

And here I am, doing something illegal - writing on my own blog! For those of you who don’t know, the reason I haven’t blogged for a couple of weeks is due to the ridiculous ban that is currently in place in Turkey preventing people from accessing any BlogSpot page.Why? Because on a couple of blogs links to illegally streamed feeds of Turkish Süper Lig football matches were being posted. The rights holder Digiturk petitioned the courts and all blogs hosted on BlogSpot were banned immediately, in a manner very similar to how YouTube was banned here for nearly 3 years due to one or two offensive videos. In true political style, Digiturk blame those who posted the feeds as well as Google for not taking action, Google say it’s nothing to do with them, the courts say “that’s the law as it stands” and the government say “something needs to be done”. Really? So DO SOMETHING then!

The ban is easy enough to work around (I am posting here now in spite of the ban after all) but I have resisted until now. Why? Well, because whether I agree or not, using BlogSpot at present is illegal and I’m a law abiding foreign resident in this land. However, something happened today that I just have to blog about so here I am.

Last Friday afternoon, the class I had was awful. The lesson started with one kid slapping another right in front of me and continued with two other insulting each other with language that would even get censored on late night TV here. The rest of the class were just fooling around and not getting on with the tasks for that day. Even the promise of watching an episode of the DVD that accompanies the book we are currently reading didn’t do the trick. Even the kids who are usually good as gold were acting up and my only recourse in the end was to write down the names of the students who weren’t doing the work to pass on to their class teacher on Monday.

So, that was a somewhat extreme example of the worst of teaching kids. What about the best? Well, today two girls who had ended up on my list were up to something. I saw large pieces of card, scissors, glue, stickers - all of which were hidden away as I approached. A few minutes later they came up to me and presented me with a very artful way to say sorry: 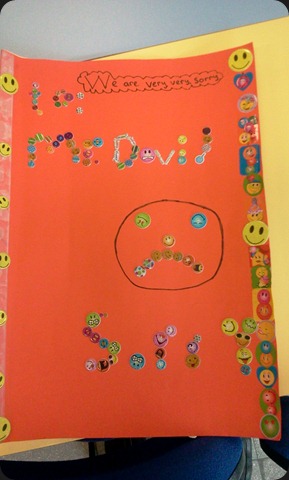 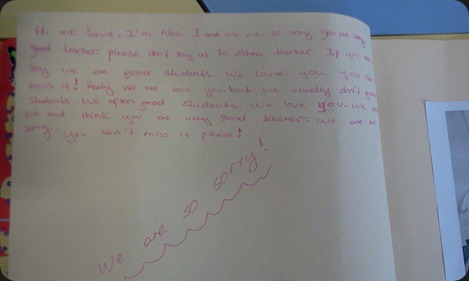 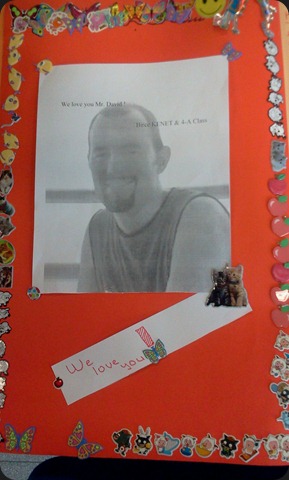 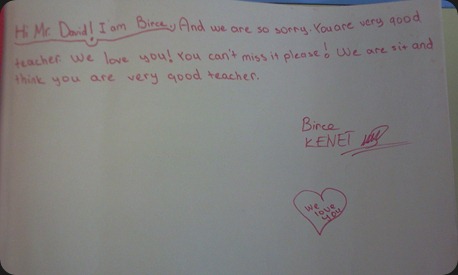 Needless to say, I was very touched by their messages and very impressed by their creativity (if a little scared by how much information they had found about me on the internet)! These are the best moments of teaching kids and the moments that need to be valued and remembered more than those Friday afternoons.