February 13, 2011
Despite being on holiday from work for the last two weeks, I’ve found it difficult to make time to write on my blog. You would think the break would give me plenty of time for blogging and study but it doesn’t. The main reason is that my son is home as well. Don’t get me wrong - I’m not complaining! It’s just that those gaps during the day when I would usually blog or do some MA work have been instead filled with trips to the park and gaming sessions on the Wii! The time I have had for my ‘teacher stuff’ has been taken up by study, the 30 Goals Challenge (see the previous three posts for my responses so far) and the blogathon so I’m only just getting round to telling you about a lesson I did almost 4 weeks ago - it’s a good thing I take notes! 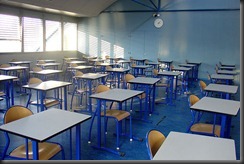 You come to this place to learn irrelevant information for regurgitation purposes.
Image by Thomas Favre-Bulle
One of the dominant sections of my teaching programme this year is preparation for the Cambridge Young Learners exams, specifically Movers. We have a book for this, Fun For Movers, but it’s a bit of a slog. One period (40 minutes) a week is supposed to be dedicated to it and we are expected to cover 3 units every fortnight. In the teacher’s book, it says each double page unit is designed for ‘60 to 90 minutes of classroom time’ so we are basically being asked to each unit in a third of the recommended time!
It would be easy to fall into the trap of just trying to plough through the book and merely cover the ground but I can’t bring myself to do that. As one of my colleagues said, it’s better to do one activity for each unit well than cover all of them in a rush. I’m always looking for ways to make the lessons more engaging and ‘unplug’ from the book and I’d like to share one of those ideas with you now.

A common type of question in the Movers test is to give a sentence describing something for which the student has to write the word (the words together with 1 or 2 extras are given with pictures above the questions). So, for example, there might be a sentence like: “This is a place where you can buy food and other things for you home” to which the student will respond “supermarket”.

Anyway, there was a unit on ‘Places to Go’ so I decided to take an unplugged approach and cover it without using the book. I first asked the students where they go at the weekend or during the school holidays and what they do there. I then got them to write one place each up on the board and we would use this vocabulary for the next stage of the lesson.

Next, I put the class into groups of 4 and asked them all to choose a different place from the board and write a sentence to describe it, in the style of the exam questions. They then checked each other’s sentences for errors and clarity while I went round monitoring and helping out when necessary. The next stage was for each group to read their sentences out for the other groups to try and answer. Some classes wanted it to be a game with points awarded for right answers and I was happy to go along with that. The main thing was that they generated both the vocabulary and the sentences and in this way, we covered most of the content of the unit in a much more student-centred and engaging way.

However, there was an issue during the vocabulary stage, which shows the problems over-using the coursebook can have. I repeated this lesson with all 5 of my classes, each time anticipating that the student-generated content would be different. In the first class, some places I didn’t expect came up like internet café (with computers and broadband common at home, have these kids even been inside a place like that?), snack bar (we haven’t got one at school and when questioned, they seemed a little unsure of what it was exactly) and amusement arcade (unexpected as they usually just use the Turkish term luna park).
Nevertheless, we continued with the lesson - after all, the whole point was that they came up with the words without me interfering, right? However, in the next class, what happened? Again internet café, snack bar and amusement park came up. And in the next class. And the one after that. And… you get the idea.

By the third class, I knew something was up and questioned the kids about why they chose these words. “Do you go to internet cafés?” I asked. “What’s your favourite snack bar? What do you eat there?” and “What kind of games do you play at the amusement arcade? Do you go on any rides?” were next. For all questions, they either said no or couldn’t answer. All was revealed when one boy pulled the book they use with their ‘grammar’ teacher out of his bag and showed me a page of vocabulary for ‘places to go’. They had been taught those words, learnt them by heart and were now regurgitating them without actually responding to the original question of “Where do YOU go at the weekend?”  They actually seemed surprised when I said I was interested in the places they really go to and what they do there.

As the new semester starts tomorrow, as a joke I’ll be asking who went to an internet café before grabbing a bite to eat at a snack bar and then we'll get into what they really did. Hopefully, they will have some real answers ready for me this time!
exam prep exams games vocabulary young_learners