My attempts to include more drama and more ‘unplugged moments’ in my lessons have continued in the new semester and so last week I decided to try some ‘unplugged drama’ with a twist on the classic ‘disappearing dialogue’.

Once again, I got the ‘inspiration’ from a rather flat course book dialogue. The scripted conversation featured two friends talking about their day with instructions for the students to simply act it out. I decided that instead of using Jack and Sally, I would get the students to come up with a dialogue themselves. 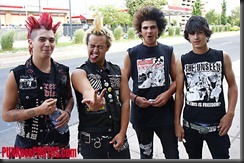 What a bunch of degenerates (not my students though!) Image by PUNKassPHOTOS.com

It simply started with “Hello _____. How are you?” written on the board and I asked the class to add lines to the conversation from there. Obviously, each class came up with something different but this time I was impressed with the diversity (unlike the regurgitated vocabulary from a previous lesson). In one class, one of the speakers was stressed about forgetting to do his/her homework, in another he/she had crashed his car and in another  he/she had lost his pet snake! Interestingly, they all followed the same pattern of establishing a problem, offering a solution and evaluating that response despite the differing content (any of my MA colleagues will see the parallel with Julian Edge’s SFRE (Situation, Focus, Response, Evaluation) framework but that’s something for another post on another day).

I then had the students practise the dialogue in pairs and encouraged them to keep going, swopping roles when they had finished. After a minute, I changed the pairings and removed one word from each line of the conversation, again asking them to rotate roles and keep going until I told them to change. We did this several times, each time removing more and more text from the board until we were left with a completely degenerated text of just punctuation marks and a few prepositions.

The students then came to the front in pairs and acted out the whole script from memory. As ever with these disappearing dialogues, it was amusing to see them still looking to the board for reminders, even though hardly any of the script remained! I was impressed by their ability to recall it all, aided no doubt by the fact that they had generated the dialogue in the first place. It was also pleasing to see them putting effort into the acting side with their facial expressions, tone of voice and body language all in use.

And as a final dictogloss-esque twist, I had a few classes who had finished early work in groups to rewrite the script in their notebooks. Now, I just need to decide whether to name that final phase ‘dialogloss’ or ‘dictologue’!