How I Did Test

There have been a few changes at my workplace this year and one of them is that I am now in charge of the ‘conversation and skills’ programme in the 5th grade, meaning I oversee things like the class blogs, project assignments and testing.

This is something quite new for me as I had never written a ‘proper’ test in my twelve years as a language teacher (I say ‘proper’ as I have made short tests for things like vocabulary and spelling before and I have also had my students make their own mini tests but this is the first time I have been asked to prepare a test that all students in the year group will take). As long-term readers of my blog may remember, I had some issues with the assessment that was done last year, particularly the listening tests which were not relevant to the course and ended up demotivating some students. Having also recently read and enjoyed James Taylor’s (aka @theteacherjames) post How I Would Test, I though I should use the opportunity to do something different. 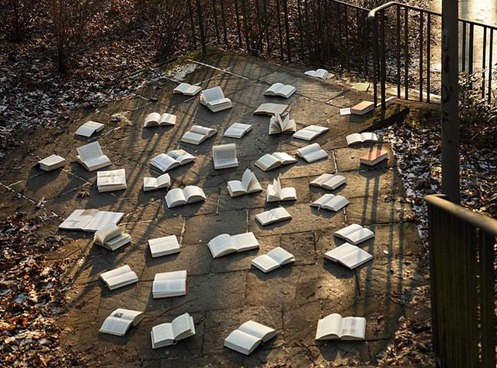 If life is an open book, why not assessment as well? Image by muffin9101985

Now, I did not do anything radically different like having the students do the test in groups or rip pages/questions out of the test paper as any such sudden shift would be too extreme (and I also had to take the fact that other teachers would administer this test with their classes and might not be willing to go along with a turn-it-upside-down approach). I did, however, use the chance to make a few changes in the preparation and administration of the test to make it a less stressful and more productive experience for my learners.

First of all, as it had been suggested by those higher up that we do a reading test, I decided to base it on two texts we had read in class this semester and then insisted it be in open book format. Granted, that might not seem very radical but for the school I work in it is! Students, especially in the middle school, are regularly tested on passages from their coursebooks and also entire readers without being allowed to refer to the book during the exam. The have to memorise the content/plot, information about the protagonists/characters and all the vocabulary as well. I have always thought this is asking too much.

The were some voices against the idea. “It will be too easy for them,” was one. “They will just copy answers from the book,” was another. Also heard were “they won’t bother to study”, “that defeats the point of having a test” and “they might fill their books with cheat notes”.

As ever, I had a few answers for those. First of all, when did tests become something that should be difficult? Surely, they should be aimed at the right level depending on the age and language ability of the students.

As for copying answers, making cheat notes and not bothering to study, I emphasised that this test would not be one that asked the students to produce facts and direct quotes from the book. Instead, it would be one that required them to make inferences, offer opinions and generally process the information from the text. In that case, an open book format is the only fair option.

And if we want to talk about the ‘point’ of testing, I guess it depends what the ‘point’ is. One of my duties in class this year has been to improve the students’ abilities to think critically and creatively and to explore deeper issues in texts rather than just scraping basic information off the surface. An open book test with appropriate questions offered the best way to assess their development in those areas.

I also included a section on vocabulary that had come up in the texts (the book presents between 4 and 6 ‘key words’ with each text). Here, I brought the students in and asked them to write their own vocab questions for the test. They worked in groups to do this, producing various questions such as gap-fills, multi-choice and definitions. We then edited and revised them, rejecting ones that were too easy or too hard and then making a decision together on which ones might be included. I didn’t use all of them, instead saying I would choose 10 questions from the list of about 20 we had drawn up so they still wouldn’t know exactly what was coming (in the interests of fairness, I supplied the same list to my colleagues so they could use them for revision in their own classes).

I firmly believe that getting students to write questions is a powerful way to get them engaged and learning. They went through the vocabulary in fine detail in order to write the questions and got a lot out of the editing and revision process too. And shouldn’t tests and test prep be part of the learning process, something that helps the students consolidate and expand what they know? Activities such as this really help them do that.

And so, the test day came and the students were ready with their books (well, most of them - there were a few in each class who, either because of conditioning or the fact that they really don’t listen, had left their books in their lockers or, even worse, at home). But I wasn’t finished there. I told each of my classes as I gave them the test that each student had the right to ask three questions. They could ask for the answer to one difficult question they were stuck on, the meaning of one ‘key word’ they were unsure about and they could ask me whether or not one answer they were unsure about was right.

Why did I do this? First of all, to reduce stress. It’s happened to all of us at some point I’m sure that we get hung up on one difficult question or word in a test and then hit a brick wall. By offering the students the chance to ask me for help, they could jump over that brick wall and get on with the rest of the test. It also encouraged them to look at the questions carefully and critically assess their suitability and difficulty. There was no point asking me for the answer to an opinion quest,on, for example, and, as they could only ask each question once, they had to choose carefully making sure there wasn’t another more difficult question or word they might need to ask about. As it turned out, many of the students didn’t ask me anything at all, saying they didn’t feel the need to!

By doing everything this way, I feel that the students were more involved in the test and less stressed about it. We were also able to stay true to our yearly objectives of going beyond mere comprehension and improving the students’ critical thinking skills, while at the same time satisfying the expectation/demand of a sit-down pencil-and-paper test. Changing those expectations is something to slowly tackle in the future.