May 04, 2012
As summer draws near, keeping my students engaged and enthusiastic about lessons has become increasingly difficult. However, I do like a challenge and I’M trying to stay positive about it so I thought I would share a lesson we did this week that went down really well with classes across the board.

Having recently had some productive fun with a video in class, I prepared a lesson combining two things I knew my students would enjoy - a funny video clip and some computer games! Most of the students I teach have access to a smartphone or a tablet, either because they have their own or they use their parents’. Although they can’t use them in class (school rules, not mine), they are always talking about their favourite new apps and games and the latest craze seems to be a game called ‘Cut the Rope’.

My son is also a fan and regularly plays on my wife’s phone or my tablet. The other day, he showed me a funny video he found on YouTube with the character from the game Om Nom coming out of the iPad and having an adventure in the house. My bad habit kicked in again and I immediately got lesson signs in my eyes and the result was as follows...

Name that logo
If you are familiar with this blog, you will know that I do have dogme leanings. However, every once in a while, I end up doing a planned lesson and this was one such case. In fact, it even had a warmer! As many apps have instantly recognisable square logos, I decided to create a slideshow using some of the most popular game apps on the Turkish iTunes store, which you can see below:

I first checked that the students were familiar with each of the logos (in every single class, they were!). We then played a memory game. If you advance the slides above, you’ll see that one logo has been covered up in each slide. The first task was to name the logo that was hidden* (if you download the slideshow, the logos can be revealed as part of the animation sequence). This was a great way to get them engaged in the general topic of the lesson.

We then had a chat about their favourite games. I asked them to describe the aim of each game and how it was played. It was amazing how keen each student was to talk about these apps. Ask them to tell you how basketball is played and they don’t know what to say but ask them to describe Where’s my Water? and the language just comes flowing out!

Om Nom Stories
I then told them that my current favourite app is Cut the Rope and asked them what they knew about the game.

They were able to describe the aim of getting the candy into the creature’s mouth and the touch controls for doing so. They also knew that the main character’s name was Om Nom and that was enough to take us onto the next stage involving this video: 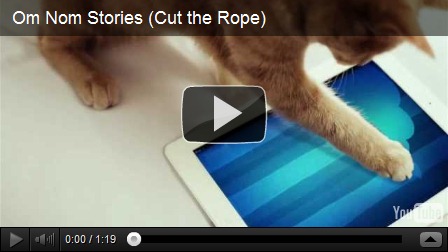 I asked the students what they thought Om Nom would do if he came out of the iPad (they universally said he would look for candy) and what they thought the cat was doing in the preview still. We then watched the video with the instruction given to pay attention carefully.

Once the video had finished, I tested their powers of observation with a few questions. We started with easy ones like ‘What colour was the iPad?’ but we then moved onto some harder ones like ‘What was the bag made of?’ (paper grocery bags are not common here in Turkey) ‘What food items were in the video?’
We then watched the video again but this time the students’ task was to write observation questions to ask the other groups. They came up with some good ones like ‘How many stars did the girl get when she was playing the game?’ and ‘Where was the umbrella?’ (watch it again if you didn’t see it!)

I then listed some events from the story on the board and gave the students the task of putting them into order with a final viewing of the video taking place to confirm their answers. The final task varied from class to class depending on the amount of time left. Some groups wrote a description of what happened in the video, some wrote an account from Om Nom’s point of view and others from the cat’s point of view and in one class, they came up with commentaries and delivered them while the video played.

As a final follow-up, I used some of the observation questions the students had come up with to make an activity page on our school wiki as a digital homework task (available here if you want to make use of it). They were also invited to describe their favourite games on the wiki as well. Considering the lack of motivation and engagement that has come as we enter the final stretch of Primary School I was very happy with the way the lesson panned out!

Question
*I originally saw this idea of a memory game using well-known logos in a webinar presentation by Paul Braddock at last year’s Virtual Round Table Conference, the archive of which can be found here.
fun games lesson ideas video young_learners