Working on the Web with Kids (1) - Wiki-waki

A major new addition to my list of responsibilities at the start of this year was to take over and revamp the 5th Graders pbworks site. It had first started a couple of years ago but hadn’t really gone anywhere with students and teachers alike seemingly unsure of exactly what to do with it. I blogged about this at the start of the year to get some of your ideas and promised an update about how it was going so here it is! 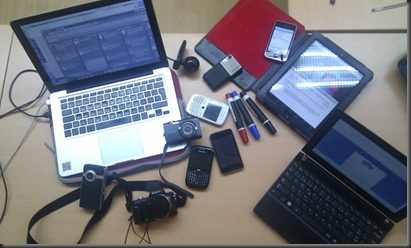 Image by Graham Stanley via ELTpics

So far, it has very much been a case of working within the limits set by my employers. For some reason, they don’t want the students to be able to edit or create their own pages meaning I have to find ways to get the students interacting on the wiki via the comments section only. With that in mind, we have been using the wiki in the following ways:

The first flurry of pages and activities I made for the wiki were based on the reader we used at the start of the year, a story called Alien Alert in Seattle. I found the wiki to be a great way to provide follow-up activities after each chapter that we read in class. In some cases, this took the form of general questions or asking for opinions about the chapter, which the students answered via the comments. In other cases, I embedded exercises made with Hot Potatoes such as crosswords to review vocabulary or quick quizzes. The students were especially impressed with my idea of recording sound bites using AudioBoo and embedding them into a matching activity - a great way to get them more engaged in listening! (See here for an example)

One great thing about doing this was the fact that it freed up more class time to get on with actually reading the book. I also found that more kids were willingly doing these activities online than I had ever seen in class.

Kids love having their work put on display in the corridor. The only problem is that apart from the kid who actually did the work, nobody ever looks at it! You might get the odd parent who wanders down the hall and has a look but that’s about it. Even though the kids aren’t allowed to edit pages themselves, I thought the wiki would provide a much more open space in which to display their work and so I have had the kids email me copies of their written work (also useful for getting them to re-write what they did in their notebooks after some feedback) or I have scanned their hand-made posters. We even went so far as to record some TV show role-plays! This has been a great way to ‘bring it home’ as they are easily able to show their work to their parents. I have also noticed a lot of comments coming from kids in other classes, which hardly ever happens with wall displays.

Without any prompting, many of the kids started to use their class page as a place to chat and ask questions, something I was very pleased to see. I have also created some activities designed to encourage chat and interaction on the wiki. I recently posted a “Truth or Lie: 5 Things About Me” video after piloting it here with my PLN - thanks guys!

(I now think this has been seriously misused as an introductory activity - it’s much more meaningful when you know someone enough to take an educated guess at what they might be lying about and maybe learn a new thing or two!)

This was a big hit - good authentic listening practice, lots of comments and speculation and plenty of questions. In class, that level of engagement from that many students would have been much harder to achieve.

On the whole, it has been a success so far with many kids (in my classes at least) accessing the wiki regularly and eagerly awaiting new tasks and new content. There have also been some issues and points raised by using the wiki, which are as follows:

I am now convinced more than ever that the whole ‘digital native’ idea is misplaced. These kids should be tech-savvy, completely at ease with registering, navigating the site and doing interactive activities, right? Wrong! So many kids had problems with registering for pbworks - many of them were thrown by the fact that they received an email inviting them to join rather than sending them a password - and many more had trouble with simple things like logging in, navigating the site and writing comments. I had to go over it several times in class and make some screencasted tutorial videos to help them along. And I’m supposed to be the ‘immigrant’ in this digital world!

One obstacle has been the parents. Even though they signed permission forms, many kids tell me their parents won’t let them use the computer, even for school work, during the week. A few even say they aren’t allowed to use a computer at all! A couple of parents have also expressed concern about this new element to the English programme (there is no web component in the earlier grades) and have called the school to question its value and insist that it should have no bearing on the kids’ grades at the end of the year… I guess they didn’t read the letter sent with the permission form! This is only a minority of cases though - most parents seem happy to have their kids doing something ‘useful’ on the computer (or at least I assume so by their silence!)

All of the students were excited to hear about the wiki site early in the year. Most of them are still excited about it and engaged. However, there are a few who have lost their enthusiasm. I added a few games and funny videos in the beginning but it seems that is all they want - “more games please teacher!” and “more videos!” are their only comments about the wiki. The other activities such as questions about the readers or hot potato quizzes generally lead to interesting excuses: “I couldn’t do it because my computer isn’t working/ my internet connection is slow/ there was a power cut/ the dog ate my computer…” I guess the lesson to be learned is kids won’t be motivated just because something is delivered via computer or on the internet. Those who struggle to find motivation for regular classroom tasks will also have the same attitude to tasks on the wiki or in some other digital form.

Overall, it’s been a success so far. Most kids are active on the wiki and want to use it. They are starting to come to me with suggestions for things to put on the class pages and some kids are even doing extra projects and asking if I can make a page for them. There are the usual institutional restraints to wrestle with and parents/students yet to appreciate the value of what we are doing but as with many of the other issues we face in education, it’s all a matter of giving it time and trying to show them what it’s all about.