Two paths to a dream house

That was the extent of the instructions given at the bottom of the page in our Fun For Movers book. Tucked away where it could easily be missed almost as though it were added as an after-thought to fill a bit of empty space on the page layout and yet here was a great opportunity to let the students be creative and come up with something imaginative. Perfect for one of our split writing classes in fact but how could I fire up their imaginations and get the ideas flowing? 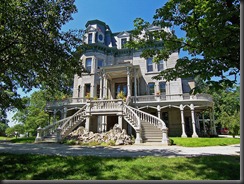 “Close your eyes and listen to the sound of my voice….”

My initial idea was to do a kind of meditation activity. I asked the students to close their eyes and relax (with some atmospheric background music) and told them to imagine themselves inside their dream house. I did actually record a video of me doing this but I’ve been informed that while I can make videos in class, I need written permission to post them online (even if the camera only shows me), so for now we’ll have to make do with a summary:

I asked them to imagine themselves in a bedroom with everything they wanted in it and posed questions to get them to think about the details (size? colour? furniture? other objects in the room? etc.). I then asked them to walk over the window - what could they see? What was near the house? I then told them to leave the room and look around the house: how many floors? How many rooms? Any special rooms? We finished by ‘walking’ around the garden and picturing what was there.

Immediately after this ‘walkthrough’, I paired the students up and asked them to tell each other what they had seen (I allowed Turkish at this point) as I felt they would need a little time to develop and expand on their ideas. We then moved on to the drawing and writing phase with me providing support with vocabulary when necessary.

In the first class I did this in everything went really well. The kids had lots of weird and wonderful ideas and produced some really nice writing. However, the next class was nearly a disaster - they couldn’t sit quietly and wanted to describe their visions to each other so much they forgot to listen! The introduction to the class was so stop-start that they struggled for ideas when it came to writing time. They had a lot of difficulty with the language needed for describing homes as well. Clearly, the meditation idea was not suitable for every class….

I consulted with one of my 4th grade colleagues about what he was doing and he said he was eliciting a class dream house to the board first, thus stimulating ideas and giving examples of the necessary language at the same time. With my next (somewhat talkative) class, I followed a similar path, first asking them about their homes before introducing outlandish questions like ‘have you got a helicopter pad on the roof?’ and ‘is there a multi-screen cinema in your house?’. Finally, I asked if they liked living in Ankara and why/why not. This was a good way to get some extra ideas flowing as they bemoaned the fact that Ankara is far from the sea (also a useful bit of language as Turks often directly translate and say ‘Ankara hasn’t got sea’!) and not very green.

I then got each student to contribute an idea as we wrote a paragraph together on the board, highlighting some useful vocabulary at the same time (sports facilities came up a lot e.g. football pitch, basketball court, skating rink, wrestling ring - yes, Smackdown! again…) They then proceeded to the individual writing task using the sample on the board as a model. In these classes, the writing was generally better - not only were there fewer errors but the structure and flow was better as well. I got some wonderful and crazy ideas as well with some houses in outer space, one in a dinosaur’s mouth, chocolate fountains in the garden, celebrity guest rooms and (my favourite) a house shaped like an iPod!

After one class, I left without cleaning the board. Next lesson, my colleague came in with one of his groups (we have special ‘conversation’ rooms set aside for these split classes) and he said he used my students’ sample paragraph as a reading text for his class. He left it on the board along with his new example so when I returned with a different group in the afternoon, there were two examples to read, compare and contrast. A perfect example of student-generated content!

I still think the meditation idea was a good one but it wasn’t suitable for every class. The second path offered more opportunities for voicing ideas, offering support when needed and tailoring the lesson to each class, all of which helped make it easier to manage. Most of the students needed more time than we had to finish so I’ll be collecting the finished creations in next week - perhaps I can scan a few and add them here.