December 08, 2010
A couple of weeks ago, games in the language classroom was the topic for ELTchat (see the transcript here) and, as usual, the chat was full of fantastic ideas. One that I shared is something I like to do every so often to give the kids a light lessons - I ask them what classroom games they know and like (can be from English or any other lesson), ask them to explain the how it is played and any special rules to me and cover the language they need to play in English before letting them choose one of the ideas. 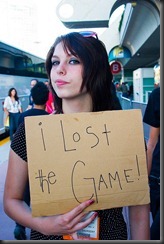 Doesn’t she know it’s the taking part that counts?
Image by scragz
I’ve done this with different classes over the last few years but never considered it as a ‘dogme’ style lesson until I got involved in all the recent discussion on Twitter and in the blogosphere about it. However, now I see that it kind of is an unplugged approach as we share knowledge, focus and expand on emergent language necessary and have a very much student-driven lesson.

Anyway, the ELTchat session prompted me to think that we hadn’t done anything like this in class yet this year so last week we did. In nearly every class, the first suggestion was (predictably) Hangman but I managed to get them to dig a little deeper and this is what my various classes came up with:

1. Charades
A classic but in one class that suggested it, we did it with a twist. Film and story titles are always problematic with young learners as they often only know the Turkish translations or don’t know how to explain the English words so we hit on a creative idea of miming the unit titles from our coursebook (the inappropriately named ‘Fun For Movers’). That led to mimes like Animals in different places, The girl in the red dress and my favourite There are bats everywhere! I taught them both the language and mimes for things like the number of words/syllables, 1st/2nd/3rd word and ‘sounds like’. I thought it was a bit of a boring suggestion at first but it turned out to be great fun!

2. Brainstorm!
We’ve played this many times before and they always enjoy it. The class is placed into teams and given a word group or description that they then have a minute to brainstorm as many words as they can think of. The team with the most (valid) answers wins. As they had studied food and containers recently, we started off with A bottle of… and A bowl of… After that, the kids came up with their own suggestions and one even put his word group inside a brain picture rather than a bubble with lightning zig-zags shooting off it! “It’s a brainstorm, teacher” he remarked. I have taught him well….

3. Word Ball
This is a kind of anagram game. We had 15 students in the class and each choose a letter of the alphabet and came and wrote it inside a circle on the board. Teams then had 2 minutes to produce as many words as they could using those letters. It only worked for a couple of rounds though as they then all started choosing letters like Q, X and Z!

4. Last letter, first letter
Does what it says on the tin: one player says a word, the next says a different word that starts with the last letter of said word and so on - no repeats, no hesitation. To make it more challenging, we restricted the words to certain groups like food or sports. For an extra bit of fun, the kids lined up in two groups facing each other. After saying a correct word, they went to the back of the line. If they were wrong or couldn’t find an answer, they sat down and we played until one team was eliminated. I implemented a ‘challenge’ system too if they thought the other team had given an incorrect answer (however, make an incorrect challenge and you sit down instead)!

6. Grow your own Word Plant
I’m sure our resident language gardener David Warr will love this one! Inspired by our use of language plants for family vocabulary the previous week, one class suggested putting prefixes, suffixes and single letters on the board (in large print) and then making words from them, branching out in language plant style. Points were awarded for the number of words as well as ‘artistic impression’ (again, the students’ idea, not mine)! I just wish I’d had my camera to snap a few pictures of them.

For some more great game ideas, check out:

If you have any other games you use in class or that your students have come up with, I’d love to hear about them!
dogme games teaching unplugged