October 27, 2015
Have you ever worked in a school where you go from classroom to classroom depending on the group you are teaching? Have you then shared a learning space with other teachers, potentially teaching other subjects?

Then perhaps you have had that conversation. You may have instigated it or you may have been on the receiving end but I'm sure it has come up at some point... the state of the board.

"Can you please make sure you clean the board before you leave the class?" it goes with an ever so slight hint of venom in the speaker's voice. They may go on to claim it disrupts the start of their lesson, affects their classroom management, or it can somehow be construed as a grave insult to the personage of the subsequent teacher, who has to demean themselves by wiping off the remnants of the previous class.

I have been on the receiving end of such fatuous criticism on more than one occasion. My initial response would be simple: lighten up! Does it seriously impede your effectiveness as a teacher to that extent? It takes all of ten seconds to clean a board! If classroom management is your concern, establish a routine - get the students to do it. With young learners, they often see cleaning the board as some bizarre kind of special honour so indulge them and give them their moment of pride! Accept that delays at the start of class are part of school life. Kids come back late after getting changed from P.E., the little ones need to go and unstick their fingers after art (come to think of it, many of the teenagers I have worked with need to do this as well!) and their books are somehow never to hand when the lesson begins. That leaves plenty of time to get the board clean. 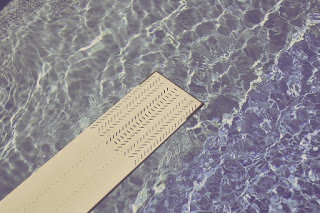 A different kind of board - just dive in! Image via pixabay

And there is also the chance for a little 'unplugged' moment. When I was teaching kids in Turkey, a colleague and good friend of mine Mr Joe (as he was known to the kids), following one of the above described 'conversations' from a particularly vitriolic class teacher, told me how he turned a full board at the start of class to his advantage. "I get the class to tell me what the previous lesson was about," he stated in a simple yet revelatory way. "It's a great warmer - they explain the content of the previous lesson, maths, science, social studies, whatever, and I ask them questions to clarify."

I was soon doing the same. It was amazing and uplifting to see and hear these ten year-old kids explain subjects as diverse as the water cycle, long division, and how the brave Turkish troops at Gallipoli had driven the scourge of the British and ANZAC army back into the sea. CLIL was a buzzword at the school at the time and this seemed to be a perfect way to integrate content with language. It soon reached the point where I was disappointed to enter a class and see a clean board...

Fast forward to my current situation in Gabon, where I have the luxury of my own classroom and my students coming to me. With a quick turnaround between classes, my board is still usually full of the previous lesson's learning when the next year group shows up. And so it was today that my Year 11 advanced group entered class moments after my Year 3/4 elementary level group had left. The little ones had been talking about favourite subjects at school. I had supplied them with Post-Its and asked them to write the names of all their lessons on one note each and then arrange them on the board in order of their favourite to least favourite.

The notes of those eight year-olds immediately caught the attention of my next class of fifteen year-olds. "What are these notes here for?" came the question. I explained and they were immediately up at the board moving them around. "Do they really have a 'dance' class as a regular lesson? That would be bottom of my list too!"

"What about science? Don't they have a class like that?" they exclaimed. We were soon deep into a discussion. Whereas the primary schoolers had simply made and compared lists and justified their choices with statements like "I like P.E. because I'm really good at sports" and "Music is my favourite lesson because the teacher is funny!" the high schoolers got locked into a debate about whether sciences should be valued more highly than arts, offering a great chance to incorporate the recent work we had done on constructing arguments and supplying clear cut, relevant examples to support them. 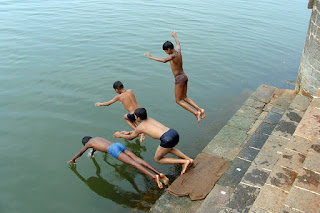 Launching into learning - Image via pixabay


It works the other way round too. In one class last year, a group of ten year-olds came in just after a Year 8/9 EAL class. Our topic had been making predictions about what life would be like in the future. My younger group eagerly asked what all the brainstormed ideas on the board were about. I explained and they responded with enthusiasm. "Can we do that too? I have some really cool ideas!" Again, outcomes were different. After looking at a text about outlandish past predictions that had been way off the mark, the older students had brainstormed and exchanged ideas and then collaborated in small groups to produce a vision of a school of the future. My younger charges first drew pictures and then presented them to their classmates with me assisting when needed with language. They then wrote short paragraphs to go with their drawings and we had a nice mini-project to display.

So if there ever are remnants of the previous lesson on 'your' board at the start of class, or if there is no time to remove them before the next group arrives, don't view it as an inconvenience or something to be literally wiped out. Instead, make your board your springboard - dive in and see where the currents take you. As the old saying goes, "it's lovely once you're in!" :)
board work classroom management CLIL creativity dogme eal elt student-generated content young_learners