The challenge is a simple yet effective one – share ‘your story’ about teaching, whatever that might be. It is in fact an extension of the original “What’s your story?” challenge of 2011, a challenge I also entered, and also entered later than most others – I am nothing if not consistent. ;-)

And so, this time I decided to tell my tale through that classic medium of stories – books. 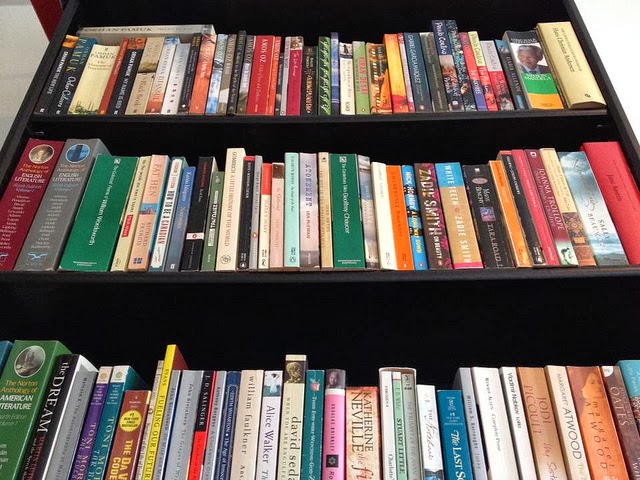 Image fittingly by @VickyLoras via #eltpics

The opening chapter
Although it was over 12 years ago, I remember the day well – the excitement, the anticipation, the relief…. Finally, we would be able to teach classes based around a modern, vibrant, colourful, and ‘newly updated’ course book.

The teachers at my school had long bemoaned the lack of an up-to-date course book. We had longed for the ease of use, the materials pitched at the right level, the listening exercises, and the structured grammar syllabus of an official book.
And now we had it – Headway no less in all its shiny, glossy glory.

A step back
I spent the first two and a half years of my teaching career bookless. On my Trinity Cert course, we were encouraged to make our own materials and use realia with just the one occasion that comes to mind of being told to photocopy an activity from a book in the resource library to ‘see what it is like’.
“Once we get our first jobs, we’ll have course books and it will be much easier,” I often heard. Not so. I took my first job at a school that didn’t have a syllabus centred around a book.

Actually, that’s not quite true. There was a book, a hopelessly outdated and out-of-print series called Blueprint. As an example of how out-of-date it was, I recall a reading page on telephones that finished with the line “Nowadays, some people even have mobile phones that they carry with them and use to make calls when they are outside!!” Even in 2000, the accompanying photo of a woman with a huge perm and even bigger classes holding a device the size of a shoebox to her ear seemed old…

The story went that the school owner had bought a job lot of the books a decade earlier and was still trying to get rid of them. Whatever the reason, hardly any of the students had the book and teachers had over the years responded by making banks of supplementary materials (you can see some of my contributions here) which in turn had become the syllabus itself. It was, quite frankly, a mess.

A leap forward
By the mid-2000s, I was teaching kids. At first, I was sharing my classes with other teachers and I was instructed to cover the writing and speaking activities in each unit of the book. That was a great comfort to me in those days. I had never taught kids before and, even though the activities seemed remarkably dull at times, it was good to have something (anything!) to keep my little terrors at bay cherished little learning partners busy.

I later moved on to having my own classes for ten hours a week and again, a book seemed crucial to fill the time. This time, we had a colourful book called I Spy with lots of weird and wonderful characters (though it was weird in a different way that they all came from different periods of history but never taught the past tense, and it was extra weird that they never fitted in with the other background characters who were actually modern day spies but hey, ho what was I to know!)
I started to lose my love for the books when going through an unnecessarily agonising period of trying to choose a new one.Why were we choosing a new own? Because we had used I Spy for five years and other schools were not using it anymore. That seemed a strange reason to change books but hey, ho what was I to know! Our new book, Stardust, was equally wonderful and bizarre in good measure.

I started to realise at this time that the learning in my classes was actually taking place in the moments between using the books when my students and I interacted and made choices (but I have already told that story before). A dissatisfaction with the prescribed learning of these books and the idea of using them just because, well, that’s what language teachers do was growing inside me…

Back to the beginning
Except that this feeling of disquiet was nothing new. I had actually started to experience back in those early Headway days. It turned out the books we not the solution to all our problems. Although they made lesson planning and preparation easier and there were some great lessons (a murder mystery story involving an ice statue as the weapon springs to mind), they didn’t magically solve all our problems in class. Many students, used to their ‘hardcore grammar’ worksheets, rejected the higher emphasis on content stating they needed to pass exams, not read about marriage contracts or listen to people talking about their unusual jobs. Others found the magazine-style presentation reminiscent of the books their own kids were using in 7th grade. Many more found some parts of the courses too simple and other parts too hard. The books simply weren’t meeting their needs….

Dogme days
Having decided upon reaching my 30th birthday that I had been teaching for a while and I needed to do something to move my career forward, I enrolled in an MA. That meant I had the chance to interact with teachers from around the world and from a huge variety of ELT contexts.

Upon the discussion forums, I noticed some teachers mentioning ‘unplugging’ their classes and ‘doing dogme’. Intrigued, I did some searching online, found some blog posts, and boom! Suddenly, I was engaged in a dogme blog challenge and I was experimenting with student-centred and student-generated lessons.

That all led up to possibly my favourite period of my career to date, when I took an unplugged approach to preparing my students for the Cambridge Flyers test. We used students’ pictures, short stories, and dialogues to build up to the exam only using something ready-made when I brought a few past papers in near the end. How I laughed at the books I had previously had to use!

I hadn’t been doing this for years
It’s always a common comment with Dogme, Demand High and whatever else that the teacher has actually been doing that for years (or that it’s ‘just’ good teaching…) It would have been tempting to look back on my pre-Headway days and claim the same….

But, as I have already alluded to, that is not the case. When I had no course book early in my career, I was teaching proscribed grammar as much as anyone else. We were firmly plugged in with a grammar syllabus, ready-made handouts, and exams tied closely into it all. Teaching unplugged does not mean teaching without a book. I think I needed to teach with and without a book to know that…

Classroom realities
But the dogme bubble finally burst. The learning programme at my old school was restructured meaning that despite the praise I had received for my unplugged lessons and the level of engagement my students showed, when the publishers came peddling their latest book it was adopted and made mandatory.

I have since switched jobs and had the chance to open my own language school (more on that in future posts) – also the chance to go unplugged again, right? Well, not really as the key backers for the school wanted their ‘product’, something unique that was desired but difficult to get in Gabon – that turned out to be course books!!!

So, as Adam Simpson predicted in the first comment on my 5 Stages of Dogme treatise, there is a step 6 – back to the book.

Epilogue – It’s not the book(s)
But they main thing I have realised is that it’s not all about the books. They shouldn’t dominate the class or the conversation around language teaching. They are present in the majority of schools but as one of many resources, nothing more. The best learning takes place outside the books in the space of interaction between the people in the room. My story so far has told me that much, but I am sure there is a lot more to discover as well…