My first post of 2015 will be a quick one reviewing one of my favourite lessons from 2014. It’s easy to show you what the result of this particular lesson was as I captured it on my phone: 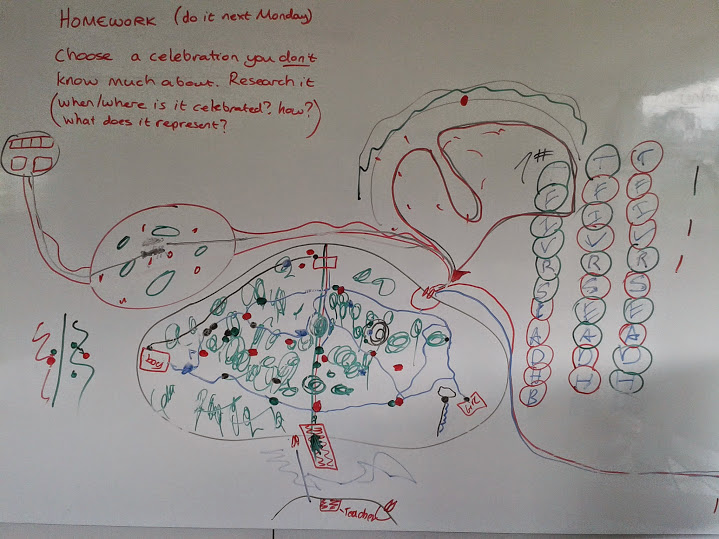 What you see is a map of an island and a shared memory of a school excursion but first of all, a little context – this is a Year 7 class of two students (both girls) who are enrolled as French first language students. However, they are both advanced level in English as one has a British parent and another is French but grew up in the USA until the age of 8.

We follow a specialised ‘language arts and language development’ in which we roughly follow the mainstream English programme but pause every so often to focus on refining and developing their language output (they are at that awkward stage of being almost fluent in English but are hampered from time to time by choice of vocabulary, pronunciation, the finer points of grammar, and choosing appropriate styles of English). They can get frustrated when they can’t quite find the right word or phrase and are on occasion reluctant about speaking at length (they are not fans of the ‘presentation’ formative assessment assignments we do, for example).

One hot, sunny day in early December (one of the best things about being near the equator!) they came to class in non-uniform dress clearly excited about something. It turned out they were off on a trip to the nearby rainforest as part of a joint science/geography project immediately after my lesson and they proceeded to share the details.

From there, they started to tell me about a 4 day trip they had been on the previous school year and very soon, my plan to get them researching a festival they didn’t know much about (which later became homework as you can see on the photo) had been shelved as I decided to see where this sudden enthusiastic flow of memories and information would lead.

They were soon up at the board, illustrating as they spoke. The picture they created over the course of the lesson is a map of an island in the middle of a lake in central Gabon. The boys and girls camps are marked at opposite ends of the island along with a separate “Teacher’s Island” nearby (each group of course having a different supervisor each night after dark).

The trails above the island show their boat trips and rainforest walkabouts and I got to hear about all the weird and wonderful wildlife they encountered. The red and green dots and lists of letters in circles represent a detailed retelling of the ‘capture the flag’ games they played and I also heard tales of students falling in the lake, struggling to make their own fires, telling ghost stories, and finding huge spiders in their cabins.

All of this was done with the two seamlessly interchanging, reconstructing, and coming to a mutually agreed version of controversial events. There were many moments when I could have jumped in to direct their enthusiasm and bountiful information into an activity or to pick up on a couple of minor improvements they could make to their output but I resisted the temptation. I also held back from asking them to consolidate everything into some kind of post-production written activity.

Why? Because they had held me as a captive audience for almost 45 minutes and I didn’t want to interrupt their flow or energy of their detailed description of the trip. I also didn’t want to deflate them by turning the focus to language points and making them think they hadn’t communicated clearly or well. I might have brought in an activity based on their input if they had started to run out of things to tell me or had brought it all to an end with lesson time still left but neither of those things happened so there was no need.

I also didn’t make the point immediately that they had spoken well at great length or that I had been impressed with their ability to communicate in partnership and support each other with extra details. I simply ended the lesson by thanking them for telling me about their trip and wishing them well for that afternoon’s excursion. I also took the photo as I said it would be a shame to just wipe off what was an integral part of their lesson.

We saved the reflective part for the next lesson when I pointed out how long they had been speaking (they were surprised) and asked them to think about how they had managed to keep up that level of enthusiasm and detail for so long. They decided that interest played a key role as did the fact that the trip was a shared experience. They also said that drawing out the map help them to visualise the memories as they recounted them.

And that was my favourite lesson – one where the students took control, communicated, collaborated, and co-constructed a detailed picture (literally and verbally). More of these is an aim for 2015!