The world was riding on the optimistic crest of the new millenium. The ‘Millenium Bug’ had turned out to be nothing to worry about, the World Trade Centre was still standing, the NASDAQ was at an all-time high, Kevin Keegan was the manager of the England national football team, mobile phones that allowed you to call AND text were revolutionising the way we communicated, and a new President of Russia by the name of Vladimir Putin had just been sworn in.

In Turkey, £1 was equivalent to just shy of 1,000,000 Turkish Lira (938,676 TL to be exact!), Galatasaray were on their way to an historic first UEFA Cup win, kids crowded into Internet cafes to play LAN battles on Quake III and Counter-Strike, an elderly Bülent Ecevit was Prime Minister of a shaky coalition, and the AK Party did not exist (and neither did Twitter!)

And in the capital Ankara, a young backpacker stepped of the plane onto the tarmac of the tiny old Esenboga airport with his recently acquired Trinity TESOL Certificate in hand ready to explore, have fun and perhaps do the odd bit of teaching to pass the time. 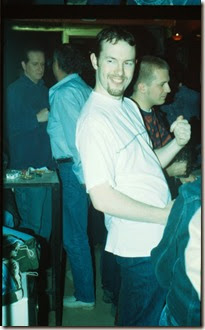 What can I say? Air Guitar pre-dated Guitar Hero I guess!

The first 36 hours was a blur of being picked up by two gents who didn’t know much English, dropped off at my apartment, taken to the school the next day eagerly awaiting the chance to meet someone who spoke English so I could ask where to get some breakfast, and shown around the premises of the dersane in downtown Ankara that would be my TEFL training ground for the next two years.

“Tone it down – they’ll never understand you talking like that”

After meeting the guy who had hired me despite my slightly hungover telephone interview on a Saturday morning just 2 weeks beforehand and the DoS/owner of the school, my first day was to be spent sitting in on other teachers’ classes to ‘get a feel’ for how things were done.

In the first class I went to, the teacher immediately told the students to ask me some questions, an activity that I would be very familiar with by the end of the day. It was an elementary level class and they asked me some standard basic questions about my name, where I was from, when I had arrived and so on. Then, one student pointed to the portrait hanging above the board and overlooking the room.

“Of course,” I replied. “That’s Atatürk, the man who created the Turkish Republic.”

A murmur of approval rippled around the classroom as the students seemed impressed by my answer. When it came to the teacher in class however, a burly stern-looking New Zealander, there was a stark contrast of disapproval as he tutted and shook his head.

“Dave,” he said. “You should have stopped at ‘That’s Atatürk’. These are elementary students. You start saying things like ‘the man who did this and that’ and you’re gonna lose them. They don’t, they can’t understand that yet.”

Slightly taken aback, I thanked him for the advice and started thinking about how I would go about toning down my language when teaching lower levels. But then, there was a moment of reassurance as a student sitting nearby leaned over and whispered “it’s ok teacher – I understand you.”

The following day, I was thrust into the teacher spotlight for the first time with an ‘extra lesson’. In this particular school, there were optional lessons each day offering extra practice to registered students divided into elementary/intermediate+ levels and conversation/grammar. My first class would be an elementary level grammar class. I was told that there may be as many as 40 students there but the numbers could fluctuate wildly from day to day. They could also be at anywhere from a beginner to a pre-intermediate level so I should, I was told, be prepared for anything.

As I scratched my head wondering how to be prepared for anything when I had no idea what to expect, one of my new colleagues came over. “Think of a lesson you did on your training course that went well,” he advised me “and do that.”

“Well,” I niavely stated, “there was a lesson I did on will/going to…”

Cue smirks and muffled laughter around the staffroom. “Yeah, go for it if you think that’s a good idea,” I was told.

I prepared some bland worksheets using pictures to elicit predictions (not unlike some of the worksheets featured here) as well as an overly-detailed lesson plan which I pored over again and again as I anxiously awaited for the lesson to start.

The room used for these extra lessons was next to the school cafeteria and had enough space for over 50 people. I remember standing at the closed door wondering what awaited inside. 20 students? 30? 40? More?

Taking a deep breath I opened the door and stepped inside. At first I wondered if I was in the right place, then I spotted 4 (yes, only 4!) students sat, of course, right at the back. I introduced myself and explained that I was new to the school and to Ankara.

Just as I was starting to think about the remarks in the lesson I had observed the day before, one student put his hand up. “What are we doing today?” OK then, we went into the lesson and I figured I could save the ‘getting to know you’ part for my first regular course instead of a one off extra lesson.

That student would then proceed to dominate the lesson as the others sat somewhat passively. One thing that stuck in my mind was when I found out that he was Course 2 in the school system and all the others were from Courses 3 and 4 and yet they looked puzzled while he provided all the answers. I recall at one point banning him from answering the next 3 questions in order to encourage participation from the others which finally brought about a little laughter in response but for most of the 50 minutes, I felt like I was doing a one-to-one lesson.

Nevertheless, I was thanked by all the students when the lesson was over and asked if I would be taking a class of my own when the new courses started the following week. I had ‘survived’ the first of what would become thousands of classroom hours and that was all that mattered.

I have been thinking about those early days a lot recently (for reasons which I shall go into a little later) and wondering what I would do differently after all these years of experience.

If I was observing a class and asked a similar question again, I would probably tone down the language a bit but I would still try to push the learners to follow natural speech and get the meaning rather than trying to understand things word for word. I would certainly be confident and well-equipped to debate the merits of speaking ‘above the level’ of the learners with a teaching colleague.

As for the lesson, I doubt I would take such a straightforward ‘examples on the board, elicit language, and do the worksheet’ approach. Instead, I would base the lesson around me being new at the school and in the city and focus on a structure like ‘In Ankara, you can…..’ or ‘You should….’ thus covering a grammar point as demanded but also giving the lesson a personal edge at the same time.

So why am I thinking of this now? Well, I will soon find myself in a similar situation. I will be returning to teaching adults (but balanced with some YL lessons as well) in a new city and a new country…

Yes, the time has come to say goodbye to TED after 12 years and ‘görürşürüz’ to Ankara and Turkey as I embark on a new adventure with my family. Where? Sorry to be a tease but that’s for another post….