The Weird & Wonderful World of Webinars

Those of you who attended the recent Reform Symposium will no doubt be familiar with the words and phrases below. You may have even uttered some of the yourself. Even if you missed out on this extraordinary event (and if you did, shame on you - go and check out the archived recordings now!), you will have seen these words appear in your Twitter stream, in blog posts or somewhere else on the web:

These are all things I experienced as well….

…(except for the ‘watching in pyjamas bit - I always hear this one shouted out at the time of virtual conferences but I wonder if anyone actually does… I’ve only ever heard of one person appearing at a conference in pyjamas and that was at a face-to-face conference… And it was an American in Paris… But then again, I heard about another American based in Paris who ran through a major international conference in a panda suit!  … Anyway, I digress…)

All of them true and deserved words for what was a fantastic event. However, while the attendees raved about the event, I noticed a different set of words and phrases being used to describe some people’s RSCON experience: 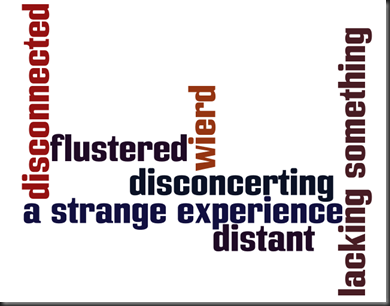 These were the words of some of the presenters, particularly those presenters who were giving a webinar for the first time. They cited the lack of a visible audience as the main reason as well as the manner in which interactivity was limited, both of which vastly reduced the sense of connecting with the audience (see these great reflections from Brad Patterson and Cecilia Lemos for example).

My feelings were somewhat different though. Granted, this was not my first online presentation - in addition to 3 virtual conferences in the last 9 months, I’ve also used Elluminate a few times during my MA studies - and, if anything, I felt more relaxed than when I do face-to-face presentations or workshops. I started to wonder why this was the case and after mulling it over, I came up with the following:

Any fan of sports will know that teams generally get better results when playing in their home stadium, just as athletes seem to go that extra yard when events like the Olympics are held in their own country. I think likewise for virtual conferences the fact that I can present from my own study in my own home (can’t get much more familiar than that!) helps a lot. If a case of the butterflies kicks in before the session, I can go and get myself a coffee, chat with my wife, play with my son or chill in front of the TV for a little while. At a conventional conference, on the other hand, it’s much harder to find a quiet place to relax for a while or some activity to take your mind off things. Oh, and the coffee is generally terrible!

Not having your audience right there physically with you can seem strange. Add to that the fact that anyone wishing to ask a question has to be given ‘microphone privileges’ and then usually fumbles through a ‘Can you hear me?’ or two and it can make for a disjointed, disconnected experience. However, this situation does offer some advantages. In any talk or workshop, there are always some people who look bored and disengaged (perhaps they have been ‘forced’ to attend on their precious day off, or they have been worn out by a long day of session after session, or that’s just their general demeanour) - this is especially a problem in workshops when you actually want them to get up and do something! Virtual conferences, meanwhile, generally seem to get a more willing audience of people who have heard through the PLN-vine and decided to join in in their pyjamas off their own back. Furthermore, if there’s anyone in your webinar who really doesn’t want to be there, they can just drop out without you even noticing (imagine how it would be if someone just got up an walked out of your workshop!). Or, if someone just wants to sit and listen without taking the mic or even clicking on a smiley or two, that’s fine as well.

And one more thing about the audience before moving on - in my three public webinars, I’ve had more familiar faces in attendance via my PLN than I have in any regular workshop I’ve ever given. Being amongst people you know and interact with on a regular basis always helps.

Although you can never recreate the flow of interaction in a face-to-face setting during a webinar (at least not with current technology), there is still plenty that can be done to make sure the session isn’t all just one way presenting. First and foremost among these is the chat box. It is difficult as a presenter to keep up with the chat at times but it also provides something a face-to-face event cannot: flowing interaction among the audience. If you were in the middle of making a point in a conventional setting and everybody was chatting to each other or passing notes, I’m sure you’d get distracted by the noise and the movement (not to mention the sheer cheek!) However, in a webinar that chat can flow between the entire audience while the presenter is in full flow which makes for a rich experience.

As for the other tools, I’ve found that working in polls, questions with replies invited via chat or smileys and web tours at different stages in the session is invaluable. Just saying ‘click on the smiley face if you can hear me’ and ‘write in the chat where you are attending from’ isn’t enough. Bringing in a few different questions and activities throughout the talk is a good way to keep the interaction going.

To conclude, I’ll steal a few words from Brad Patterson’s title. The simple fact is that presenting online is very much different from presenting a session at your local (or international) ELT conference. A big part of successfully negotiating the ‘void’ is to acknowledge it and accept it. Just like after a lesson or a face-to-face workshop, it’s always worth reflecting on what went well and what didn’t and using that to make improvements for next time. That way, as presenters, we can feel just the same way as our attendees (and maybe even say ‘I presented in my pyjamas!’….. or not….)