I’m writing this already back at work in my school in Ankara after a great weekend in Istanbul at the 2nd ISTEK Schools International ELT Conference. The whole weekend was a great experience from start to finish with great speakers and thought-provoking sessions. I really enjoyed Lindsay Clandfield’s talk on ‘The Power of Lists’ and so, inspired by that and his newly-archived 6 Things blog, here my list of 6 Reflections from ISTEK:

This was the first time I had ever met anybody from my PLN in person and the experience was surprisingly normal. Had I not built up my PLN over the last several months, I probably would have briefly chatted with a few people along the lines of ‘where are you from?’, ‘where do you work?’ etc. I might then have briefly spoken to a couple of the better known speakers and that would have been that. Instead, upon seeing people, conversations were struck up straightaway with hellos and nice-to-see-yous taking the place of introductions. I can honestly say that I enjoyed meeting everyone, all of whom were exactly as I expected (except for Ania who showed up as a brunette instead of a blonde)! The feeling of normality was such that it wasn’t even weird when Mike Harrison arrived and showed up in the room at 5.50am - that situation would have been seriously awkward with a complete stranger. 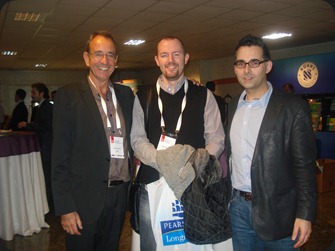 Caught in an unplugged sandwich

Thanks are also due here to Luke Meddings and Scott Thornbury for a great chat and indulging me by signing my copy of Teaching Unplugged, Nicky Hockly and Lindsay Clanfield for doing likewise with Teaching Online, Gavin Dudeneye who will help me supercharge my Android tablet device, Mike Harrison, Özge Karaoğlu and Marisa Constantinides for their kind mentions of me during their sessions and Işıl Boy for attending my session and also introducing my to a few Turkish ELT contacts around the conference venue. And thanks to everyone else who made it a great weekend, especially (goes without saying) Burcu Akyol. 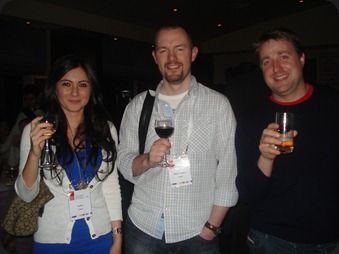 This is what the ever-optimistic Shelly Terrell told me after we had found her bag containing most of her digital life in the restaurant she had left it in the night before. Most people I know would have been in a blind panic to have lost their laptop, hard drive and files for upcoming keynotes and presentations but not Shelly. She just told me she had faith in people to do the right thing and was confident we would find it later. She even sat calmly though the morning plenaries before we went to find the missing bag in the lunch break. Sure enough, it had been found and put to one side by the cleaner in the restaurant. Shelly told me how she believed some good fortune would befall that lady for taking care of the bag and returning it. I think the good person who had the good fortune here was Shelly though - and don’t forget, you owe me a favour!

This comes partly from the above story as Shelly was not completely at a loss on Sunday morning as she had her iPhone and all her most important stuff backed up on an external hard-drive. It also partly comes from the stories of people not having enough photocopies for their workshops (like me!), running out of battery power on their mobile devices (me again!) or being in desperate need of an extra pair of shoes (like Işıl)!

4. Karaoke is actually quite fun

As you may have noticed from my pre-conference tweets, I wasn’t too keen on my forced participation in the karaoke but it was a good laugh in the end… And next year, I’ll try to be organised enough to get a Pecha Kucha ready! 5. There’s a lot of catching up to do

In many ways! On a conference level, I realised just how big the ISTEK event is in only its second year, much bigger than my own school’s event despite that being in its 4th year now. On a school level, I spoke to many other teachers of young learners based in Turkey who work with much smaller classes than I do and have much greater access to computers, both in class and as part of blended learning programmes - I still work in an environment with one class computer very much on its last legs… And on a personal level, I feel I’ve come a long way in recent years to now be involved in events like this one and the recent VRT but I still feel like I’m feeling my way around. I’ll reflect on my workshop in more detail in another post but I saw enough elsewhere to make me want to make some changes for next time.

The conference was great and it was a shame the weekend had to come to end and I had to dash for the airport in the knowledge a whole year will pass before it comes round again. I hope I’ll be there again next time, either giving another session (if they’ll have me back!) or just in attendance. Counting down the days already - ISTEK is the new Christmas: It comes but once a year and it’s definitely worth the wait!

Still to come: reflections on my own workshop and a round-up of the other sessions I attended